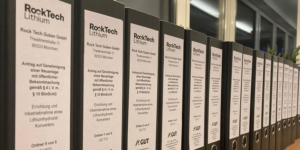 Rock Tech Lithium has received approval for an early start from the responsible State Office for the Environment for the construction of its lithium converter in Guben, Brandenburg, and is planning the first major work on-site in the next few weeks.

As with Tesla’s Giga Berlin, the LfU has “granted approval for early start in relation to the first tranche of the permit”, according to Rock Tech Lithium. The first partial permit was applied for back in February 2022. The public was also involved in the procedure, but there were “no objections under licensing law”. Rock Tech sees this as a positive sign of support for the construction of the converter and at the same time praises the speedy and transparent cooperation with the authorities.

A building permit has not yet been issued, but according to the company, the approval for an early start is “a pleasing indicator for the expected building permit”. In November, Rock Tech submitted the second and final permit application to the authorities for this. A decision is expected in summer 2023.

In the coming weeks, the first work is to start on the company’s own property in the industrial area in Guben – this is to involve ground work as well as the construction of roads, office and storage buildings. It also says that more than 250,000 man-hours and more than US$37 million have already been invested in the converter’s process and construction planning.

“”Our converter will be one of the first of its kind in Europe. The production of our battery-grade lithium hydroxide will be an essential part of the battery mineral supply chains in Europe – this is another reason why the approval by the authority is an important step towards implementation and sends a clear signal to the market,” says Klaus Schmitz, Rock Tech’s Chief Operating Officer.

Rock Tech Lithium is a German-Canadian company with headquarters in Vancouver, which extracts the raw material for the lithium hydroxide from its mine project in Georgia Lake in Ontario, Canada. This material is to be refined into battery-ready products in Guben, among other places.