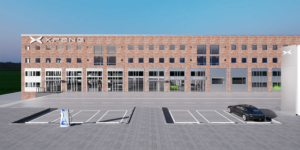 Chinese electric car manufacturer Xpeng has announced plans to open four delivery and service centres in Europe. These are scheduled to open in the first half of 2023 after the company’s European plans were temporarily halted last year. The young company has also issued a hefty price cut in China.

The Xpeng centres in Europe are to support the delivery of its electric cars in Norway, the Netherlands, Sweden and Denmark. The delivery and service centre in Lørenskog, Norway, is the first that is scheduled to go live, opening in February, with more such centres in Badhoevedorp, the Netherlands, Stäket, Sweden, and Hillerød, Denmark, by mid-year. The Badhoevedorp site will also serve as a training facility for the company’s employees as well as external technicians.

The centres’ are going to focus on pre-delivery inspections, aftersales and repairs. Xpeng also plans to set up a spare parts centre at Schiphol, near Amsterdam Airport with a partner company to reduce waiting times for parts for European customers.

Xpeng has already established distribution partnerships in Sweden and the Netherlands. Xpeng opened reservations for its P5 in March 2022 in Denmark, the Netherlands, Norway and Sweden but suspended them until further notice in June 2022, citing global supply chain issues. There is still no info on a possible launch in Germany, France, Luxemburg or Belgium, which would be the next significant electric car markets in Europe.

Brian Gu, vice chairman and president of Xpeng said, “We’re establishing our first tier of Xpeng Delivery and Service Centers in Europe to help realize our goal of creating a seamless yet unique Xpeng customer journey, with customer experience at the heart of our offering.”

The automaker also announced a comprehensive service agreement for its European customers as part of the deal, which will include an eight-year vehicle battery warranty. The service agreement also includes tire storage and easy access to information about their vehicle via the Xpeng app, such as maintenance requests and history, as well as the status of the vehicle.

At the same time in China, the manufacturer has lowered the prices for almost all of its models. The move comes shortly after Tesla’s massive price cuts (first in China, later also in Europe and the US). The flagship Xpeng P7 sedan has become up to 36,000 yuan (4,910 euros) or 12.5 per cent cheaper in China and is now available at prices starting at 209,900 yuan (28,645 euros). In addition, the range has been reduced from nine to four variants, mainly combinations of drive variants with various equipment there were previously six versions of the 480-kilometre range version alone, but there will be two in the future.