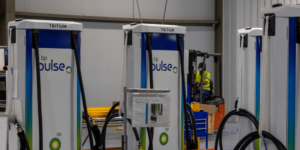 Australian charging station manufacturer Tritium has received the largest order in its history. The new order comes from BP and includes fast charging stations of the RTM product series with 50 kW and PKM with 150 kW for use by BP Pulse in the USA, UK, Europe and Australia.

However, Tritium did not disclose in the announcement how many stations the new order actually includes. Since it is the largest order in the company’s history, it must be more than 1,000. BP had already ordered 1,000 fast chargers from Tritium for the British, Australian and New Zealand markets in 2022.

The RTM with 50 kW is a modular charger that is supposed to be suitable for locations in retail or the hospitality industry, among others. However, this charging pole can also be used in remote areas where the grid capacity would not be sufficient for higher charging powers without further measures such as buffer storage. The 150 kW modular PKM charger is a DC charging solution announced at the end of 2021, which has a special feature of power distribution with multiple charging units.

Unlike the order from May 2022, when only English-speaking markets were listed, there is now a general mention of Europe. It is rather unlikely that the columns will come to Germany under the BP Pulse label: in this country, the British petroleum company is primarily active with its German subsidiary Aral, which is building its own charging network with Aral Pulse – and is relying primarily on Hyperchargers from Alpitronic. The first Aral charging stations also used columns from other manufacturers.

Tritium plans to manufacture the charging columns for North America and Europe at its new US plant in Lebanon, Tennessee. Production of the RTM series started there in August 2022. According to the information provided at the time, PKM production is to follow in early 2023. The BP charging columns for use in Australia will be built at Tritium’s plants in its home market.

“We’re grateful to the bp team for their order and look forward to working together to support bp pulse as they build a reliable, accessible fast charging network around the world,” said Jane Hunter, CEO of Tritium. “As a result of bp’s order, Tritium’s industry-leading fast EV chargers will make it easier than ever before for commercial and everyday drivers to join the e-mobility transition.”