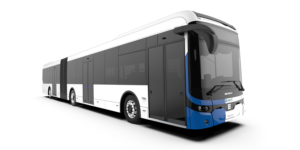 The Dutch electric bus manufacturer Ebusco has a new customer in Germany: Ebusco won a tender from KVS GmbH Saarlouis and will be commissioned by the public transport company to supply 20 electric buses.

The order specifies 15 examples of the Ebusco 2.2 with a length of 12 metres as a solo bus and five Ebusco 2.2 in the 18-metre version – as an articulated bus. The vehicles are to be delivered at the beginning of 2024 and will be used in the Saarland and the city of Saarlouis.

The Ebusco 2.2 is the manufacturer’s tried and tested model, which is still regularly ordered. With the Ebusco 3.0, however, the Dutch company also have a newer model on offer, which is supposed to reduce consumption and thus energy costs due to its lightweight construction.

Ebusco states that winning the tender in Saarlouis, in which other e-bus suppliers had also participated, underlines “once again the competitiveness of the Ebusco 2.2 in terms of range and energy consumption”. However, more detailed reasons why the KVS chose the 2.2 instead of the 3.0 are not given.

KVS managing director Andreas Michel only states that Ebusco prevailed with the best offer. “The Ebusco 2.2 low-floor buses have a very large radius of action and will help transform KVS’s fleet step by step to emission-free transport,” Michel is quoted as saying in the Ebusco release.

Wolfgang Hackauf, Sales Director Germany at Ebusco, adds: “We are very proud to be able to win this tender for Ebusco. We are very much looking forward to working with KVS Saarlouis, together we can fulfill our common goal to make public transport more sustainable.”

Electric trucks on the roll in Gothenburg port