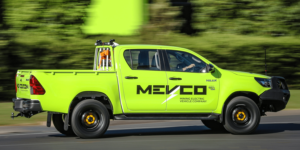 In Australia, commercial electric vehicle supplier SEA Electric and Mevco, a systems integrator specialising in light-duty EVs for the mining industry, have agreed to cooperate on the conversion of 8,500 Toyota off-road vehicles to electric drives.

The deal is worth nearly $1 billion AUS, which amounts to around 648 million euros. The two companies plan to equip 8,500 units of Toyota’s Hilux and Land Cruiser models with SEA Electric’s SEA-Drive electric drive system over five years for use in the Australian mining industry. The Hilux is part of Toyota’s pickup series, while the Land Cruiser is a large off-road vehicle. SEA says the electric drive system will enable “various mountain-specific” variants in 4×4 and 4×2 configurations.

Without revealing the technical data, SEA says it will be using its medium‐voltage architecture that does not require active thermal management. The powertrains are to be combined with one of two battery options, depending on requirements: an 88-kWh battery is to allow up to 380 kilometres, while a 60-kWh battery should enable a range of up to 260 kilometres.

Mevco CEO Matt Cahir told Australian Resources that the partnership is pivotal for the mining sector: “It enables the world’s leading EV technology for heavy and light commercial trucks to be commercialised on a scale that makes sense for the bespoke needs of the mining sector,”

As the converted vehicles were launched with demonstration models available in Melbourne, Brisbane and Perth, over half of the 2023 allocation of the Australian-developed battery-electric vehicles were already pre-sold. In September last year, SEA expanded its electric truck production capacity in Melbourne.

SEA Electric has caught a couple of demand surges in the global transport transition. In the USA, where the company now also has a base in Los Angeles, 2021 saw the company offering an electric step van for the US market and scoring a contract from US school bus dealer Midwest Transit Equipment (MTE) to convert 10,000 existing school buses to electric vehicles.

Hertz to deliver 25,000 BEVs for Uber in Europe