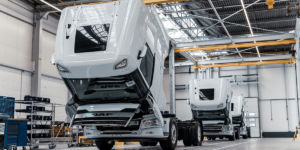 DAF Trucks has opened an assembly plant for electric trucks in Eindhoven. Series production of the XD Electric and XF Electric models, which were introduced last year, is to start there in the spring.

The manufacturer presented the two models at the IAA Transportation in Hanover. The electric trucks have modular powertrains with Paccar electric drives that produce between 170 and 350 kW and a range of battery packs for ranges of 200 to over 500 kilometres that can be charged with up to 325 kW.

Both electric trucks are, as is common with trucks, not built on pure EV platforms, but are the electrically powered variants of a series that is also offered with combustion engines. DAF’s XD series is intended for the distribution segment, for which, for example, the cab has also been equipped with special features such as a “curb view window”. The XF series, on the other hand, is a long-haul truck.

The assembly plant that has now been opened is not a completely new plant, but merely a special assembly line for the electric models, which is located on the existing factory premises in Eindhoven in a different hall from the assembly of the combustion engine trucks. The construction of the hall and the installation of the machines was completed in 18 months, according to the statement.

Following the planned start of production of the series models in the spring, DAF expects production to increase to several thousand vehicles per year over the next few years – “in line with the growing demand for fully electric trucks”.

Assembly in the electric truck production starts with a frame manufactured in another part of the plant without a driveline, but with the cab already assembled. The 4×2 and 6×2 tractors and chassis are then completed with all the necessary components to form the XD Electric or XF Electric in an eight-stage process on the electric truck assembly production line.

Different electric drive systems are used depending on the vehicle and customer requirements. As reported at the premiere, DAF relies on the EX family from Paccar. The Paccar EX-D1 drive is offered with 170, 220 or 270 kW. The Paccar EX-D2 with 270, 310 or 350 kW. With the former, the maximum torque is 1,200 Nm, with the D2 it is up to 1,975 Nm. Both engines are combined with a three-speed transmission from ZF.

Mercedes-Benz Vans is looking at global production for VAN.EA