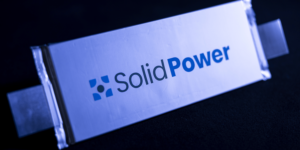 BMW is to set up a prototype line for solid-state battery cells at its Cell Manufacturing Competence Centre in Parsdorf near Munich, based on designs from partner Solid Power.

This is made possible by the US company’s research and development licence, which is now also confirmed by BMW. As the next step on the road to long-term industrialisation, Solid Power plans to deliver “full-size cells” to the BMW Group for automotive testing purposes this year – but still from Solid Power’s own production. A first BMW demonstration vehicle with the technology is planned before 2025.

BMW does not specify exactly which “full-size cells” are involved, as neither key data on energy content or charging capability or even the format of the cell itself. An accompanying press photo published by BMW shows a pouch cell from Solid Power.

“Looking at the nearer future and beyond the relationship with Solid Power”, BMW also refers to the already announced sixth generation of battery cells. These are the round cells with a 46-millimetre diameter that are to be installed in the vehicles of the New Class. In electric sedans, these cells are to be 95 millimetres high, in SUV models 120 millimetres. Whether BMW will also favour a change to round cells for the solid power cells or switch to pouch cells for a seventh generation is currently left open by the Munich-based company.

“BMW remains committed to the pursuit of all-solid-state batteries, a technology which we believe has significant potential for the future,” said Frank Weber, Member of the Board of Management of BMW AG for Development. “We look forward to working even more closely with Solid Power and adding the capability to produce solid-state cells based on Solid Power’s designs at our own pilot facility. We expect this agreement to accelerate the installation of our solid-state prototype line and our companies’ mutual goal of commercializing this promising cell technology.”