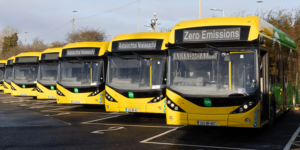 Athlone, located in central Ireland around 100 kilometres west of Dublin, will become Ireland’s first city with an all-electric city bus fleet. From this Sunday, 29 January 2023, all bus operations in Athlone will be switched to eleven Enviro200EV electric solo buses supplied by BYD-ADL.

The eleven Enviro200EVs are to be operated by the local public transport provider Bus Éireann. The vehicles for Athlone are the first delivery from a framework agreement signed by BYD-ADL with the National Transport Authority of Ireland (NTA) in July 2021 for up to 200 Enviro200EVs.

For BYD-ADL electric buses BYD provides the electric drives, including LFP batteries, and ADL is responsible for the buses’ bodies and interiors. For this agreement with the NTY, the electric buses will sport bodywork that has been specially tailored to the requirements of the Irish operators, including stipulations for 27 fixed seats and six folding seats in the open areas for wheelchairs or prams.

The electric buses are charged via a newly constructed charging infrastructure at the Éireann depot on Station Road in Athlone, where a new transformer station was also built for this purpose. In preparation for the electric buses, drivers and mechanics have taken an extensive training programme on the special features of driving, operating and maintaining the new vehicles.

“The experience we gain here with our colleagues in Bus Éireann will doubtless stand us in good stead as NTA rolls out similar programmes in Dublin and in other cities and towns in the months and years ahead,” says Anne Graham, CEO of the National Transport Authority.

The project is part of a €10 million investment by the NTA. This is the first project to launch under the Irish government’s Pathfinder Programme to enable state agencies and local authorities to deliver transport projects around the country within the next three years. The is a key element of the implementation of Irish National Sustainable Mobility Policy, wherby the government plans to achieve a 50% reduction in greenhouse emissions by 2030 in the transport sector.

The Irish Transport Minister Eamon Ryan said: “I’m also delighted that this change is starting in Athlone because the other big difference afoot is the upscaling in rural transport that is happening. In 2022, we connected 67 new towns with buses, and that number will continue to climb,” said Ryan. The Irish Minister addresses an under-reported point here since lower-density areas throughout Europe have been traditionally underserved in terms of transport infrastructure. This is a pressing issue since these areas are more car-dependent, whereby, with increasing inflation, so too increases the number of people who cannot afford cars.