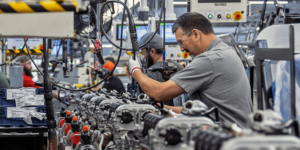 Nissan is planning a US$250 million investment in its Decherd engine plant in the US state of Tennessee to support the electrification of its product range, according to its CEO Makoto Uchida. This is apparently to increase the production of electric drives in the US.

The investment itself was announced by Nissan CEO Uchida to Automotive News. He did not give further details on the timing and the exact purpose of the investment, but as he described the step as part of Nissan’s intensified US electrification plans, it is obvious that Nissan wants to increase the production of electric motors at the Decherd plant.

The plant currently produces electric drive systems for the Nissan Leaf as well as internal combustion engines. The Nissan Decherd Powertrain Plant is located in southern Tennessee, about 70 miles from the Nissan Smyrna Assembly Plant in the same state. The Leaf, among other vehicles, is built there.

But the additional e-motors from Decherd are unlikely to be just for Smyrna: Nissan had announced in February 2022 that it would invest 500 million US dollars in its Canton Assembly Plant in the US state of Mississippi to build two electric models for Nissan and Infiniti as well as battery packs for them from 2025, and also hinted at plans for a battery cell factory in the US. Presumably, the new investment in electric drive production in Decherd is related to the two new electric models Nissan plans to build in Canton.

According to CEO Makoto Uchida, Nissan wants to focus more on pure e-cars than on hybrids with the ePower drive in the USA in the future. The Nissan boss apparently acknowledged in the interview that the global market for battery-electric cars was growing faster than the company had forecast. Uchida therefore stated that the company’s new strategy was to exceed its previous electric targets in all markets – but he did not give any concrete figures.

Nissan presented its current electric vehicle strategy in November 2021. This strategy envisages that globally, half of sales should be accounted for by electrified vehicles by the financial year ending on 31 March 2031 – also thanks to 15 new BEV models by 2030. For the USA, a target of 40 per cent of sales was specifically mentioned. But that is likely to change: Automotive News expects Nissan to announce a revised US electrification target on 31 March 2024.

First indications of prices and specs for the Kia EV9