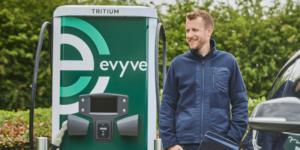 In the UK, the Australian charging station manufacturer Tritium has now become the preferred hardware supplier for charging provider Evyve. The British charging provider aims to install around 10,000 electric car chargers in the UK by 2023.

The agreement between the British and Australian companies includes an initial firm order from Evyve for 350 Tritium fast chargers. The first 60 charging columns have already been installed and commissioned. The order is part of the charging network’s plans to invest £25 million in Tritium fast and ultra-fast charging stations over the next two years, for which Evyve will be using Tritium’s 75- and 150-kW chargers.

The two companies have not elaborated on Tritium’s status as the “preferred” manufacturer and whether this means that Tritium will be the exclusive supplier or will merely supply the majority of the charging columns for its UK charging network rollout of more than 10,000 chargers. “For Tritium, this announcement is a reflection of an increasing number of conversations with customers looking to address anticipated multi-year demand and secure product availability beyond just the next 12 months,” says Tritium CEO Jane Hunter.

Evyve is currently building a customer network that includes UK construction project developer Peel L&P and hospitality companies such as Greene King, which operates over 2,700 pubs, restaurants and hotels in England, Wales and Scotland. The charging stations are likely to be located at shopping centres owned by Peel L&P or Greene King pubs. The stations already in operation are concentrated in the centre of England, around Greater Manchester, where Peel L&P has its headquarters. Further stations are planned across the country, including Greater London and as far as the south coast of England.

“Evyve is focused on providing a seamless and reliable customer experience, and we are thrilled to be partnering with a leading fast charger manufacturer like Tritium, giving us the confidence to accelerate our plans to become one of the UK’s leading charge point service providers,” says CEO James Moat. “Due to its compact design and modularity, Tritium’s innovative fast charger technology has enabled us to roll out our network across multiple locations quickly and efficiently, providing us with the foundation to support the UK’s transition to electric vehicles today and 20 years from now.”

Tritium has quickly become one of the fastest-growing charger manufacturers in the world. Just a few days ago, the Australian company received the largest order in its history from BP for use by BP Pulse in the USA, UK, Europe and Australia. While Tritium did not disclose in the announcement how many stations the new order actually includes, one can assume it is for over 1,000 units since BP  already ordered 1,000 fast chargers from Tritium for the British, Australian and New Zealand markets in 2022.

Volkswagen and OVO Energy launch V2X trial in the UK

Vattenfall to install chargers at NH Hotels in Germany