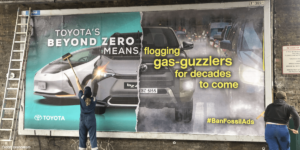 Climate activists recently put up 400 fake advertising posters for BMW and Toyota in Germany, Belgium, France and the UK, calling for a ban on advertising for fossil-fuelled vehicles, especially SUVs. The European Commission is also aiming to tackle greenwashing.

Meanwhile, Euroactiv has reported a planned EU Commission bill to require member states to impose deterrent penalties on companies that engage in greenwashing. The Commission found that 40 per cent of the products labelled with the words “green”, “eco,” or “environmentally friendly” are misleading consumers with the use of these labels.

York struggles to put electric vehicles on the road