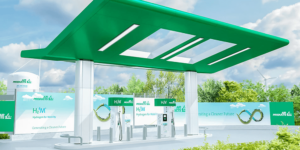 Air Products and Cummins want to drive the development and deployment of fuel cell trucks in the Americas, Europe and Asia. After a demonstration and pilot phase, Air Products plans to convert its global fleet of about 2,000 trucks to run on hydrogen with Cummins to supply the powertrains.

China charging update: China’s plan to roll-out a nationwide charging-station network (we reported yesterday) is taking on shape. 12,000 EV charger stations, half of them fast-chargers, are to be installed by 2020. The first 1,888 rapid-chargers shall stand by June 2016 already.
xinhuanet.com

Green Gate: At Frankfurt Airport the first Green Gate has opened as part of the E-PORT AN initiative. At gate A15, passengers can inform themselves about the airport’s various e-mobility projects. Fraport, Lufthansa, the State of Hesse and the Rhine-Main model electro-mobility region are partners in the initiative.
aviationtribune.com

The Go Ultra Low City Scheme enters the next stage as the 12 cities shortlisted earlier this year have handed in more detailed bids. Proposals range from car scrappage schemes over street lights doubling as EV charge points and the electrification of council fleets.
fleetnews.co.uk, businessgreen.com

New e-bike legislation: California Governor Jerry Brown signed a bill that clarifies types of electric bicycles in the state. It introduces a distinction between e-bikes with motor support up to 20 mph, which are now allowed on cycle paths, and speed pedelecs (up to 28 mph). Also, e-bikes are no longer classified as mopeds.
electricbikeaction.com

News from Tesla: The EV pioneer is building a new showroom combined with a service-centre and a row of Superchargers in Rocklin, California, with a massive array of photovoltaic solar cells to power the entire site. Meanwhile, Tesla hopes to be allowed to open as many as twelve of its stores in Texas.
greencarreports.com (California), wfaa.com (Texas)

Taking a back seat: Kia wants to refrain from bringing electric and hybrid vehicles to Australia, as long as there are no clear signs from the government. At the moment, there are no plans for subsidies, nor policies that would push for the development of charging infrastructure.
themotorreport.com

EV sharing in Yokohama: The Japanese branch of Mercedes-Benz will be offering a one-way car sharing service called Smaco in Japan from September. Together with Orix and Amano, the carmaker will deploy 20 Smart ED which can be collected and returned at eight stations in the metropolis.
orix.co.jp 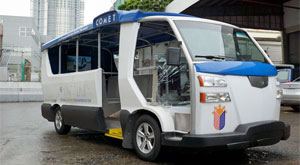 Electric Jeepney: In the Philippines, the “jeepney,” a decorated bus-like vehicle, gets electrified. The task has been taken on by domestic Global Electric Transport together with its partner Pangea Motors from the States. They now started serial production of the COMET (City Optimized Managed Electric Transport) and plan to build 20,000 of the 18-seater over the next five years.
wheninmanila.com, green.autoblog.com

Hydrogen at Heathrow: Air Products, the operator of the London airport’s H2 station, has introduced an additional SmartFuel hydrogen high pressure tube trailer to its fleet. It will add a 700 bar refuelling capability to the public hydrogen refuelling station.
fleetnews.co.uk

Hurry up, if you happen to live in North Yorkshire. The Richmondshire District Council together with Yorkshire Energy Partnership is offering to set residents up with a free charging facility to those with off-street parking space. However, the ‘Electric Richmondshire’ scheme is only available until August 18.
thenorthernecho.co.uk

DHL enlarges EV fleet: The logistics company has just added the ‘Colibus’ to its fleet in Bordeaux. This electric transporter built in Auch, France, can carry up to 750 kilos, has a range of 120 kilometres and reaches a top speed of 80 kph. The addition of the Colibus brings DHL’s count of all-electric vehicles in its French fleet up to six.
journalauto.com (In French), emobilitaetonline.de (In German)

New automotive fuel cell stack: PowerCell, a Volvo spin-off developing fuel cell technology, is about to finalise its second generation (S2) fuel cell stack platform. The S2 covers a power range up to 25 kW and can be used in stationary but also automotive applications as it is very compact.
greencarcongress.com

Mobile H2 charging truck: Air Products launched a lorry capable of transporting hydrogen at a pressure of up to 350 bar. The ‘SmartFuel’ tube trailer can also operate as a mobile fueling station and will be used to support the hydrogen fuel cell bus programme in London.
fleetnews.co.uk