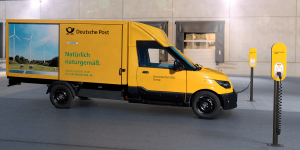 Deutsche Post DHL has hit its target to operate 5,000 of its “homemade” electric StreetScooter vans even before the year’s end. No. 5,000 has gone into service already in November and adds to the 13,000 km driven so far.

Deutsche Post now counts 1,000 cargo pedelecs by StreetScooter in its operation but they are just a tenth of its 10,500 strong fleet of e-bikes. Another 2,500 electric StreetScooter Work vans complement the pedal-assist two-wheelers and trikes and the company says their number will only increase.
postandparcel.info, dpdhl.com

Zero emission logistics by 2050 is Deutsche Post/ DHL’s commitment to the future of deliveries. Its ambitious target applies to both its own operations and to those of its subcontractors. However, as 2050 is far, the group formulated four milestones for 2025 already, that are part of its GoGreen programme. One of them is to switch 70% of its delivery services on the first and last mile to electric vehicles.
dpdhl.com

The first 27 next-gen electric trucks are due to arrive in California tomorrow. Reason enoigh for CARB to gather together all partners involved, namely the state of California, the San Bernardino Council of Governments (SBCOG), Daylight Transport, and BYD. More e-trucks are to be delivered this summer.
ngtnews.com

Austrian EV incentive: Lower Austria raises subsidies from 4,000 to 5,000 euros only days after the federal government introduced the measure. Also funding for EV charging stations is to increase from 200 to 800 euros in the province, which aspires to become one of the greenest in the Alpine state.
diepresse.com

150 kW charging test: French DBT recently presented its multi-standard charging station with 150 kW. The equipment will now take part in a collaborative research project which will also determine the effect of power charging on the grid.
avere-france.org (in French)

The future of deliveries is electric and robotic, the Fraunhofer IML finds in its study called Logistics on the Last Mile. Particularly in urban centres, deliveries will accelerate, be electric and may use the quiet night hours. Rural areas however will have to wait a little longer and also stick with the ICE for a bit.
zf.com

Electric bus success: Two electric buses prove their worth for London operator GoAhead. After testing the vehicles from Irizar for 18 months, the i2e electric buses will be incorporated into the fleet and serve on line 108 in East London. Spanish Irizar is to provide service and maintenance.
greencarcongress.com

Electric mail: Deutsche Post DHL extends its electric delivery service to Hamburg. 75,000 homes in the city will get their mail delivered by 30 Streetscooter. More electric vans will join them in the future.
dpdhl.com (in German)

Electric mail delivery: Deutsche Post launched the ‘GoGreen Regional’ pilot project for business customers in the German cities of Duisburg and Essen. It is a give and take; the more mail orders are received via GoGreen, the higher the investment in deliveries with electric vehicles. To bolster up the claim, a total of 30 electric StreetScooter will be deployed in both towns.
postandparcel.info

Over 250 Hyundai ix35 Fuell Cell are on the roads in Europe this October. The Korean carmaker just delivered another 50 hydrogen vehicles. By the end of 2015, they can found in 13 European countries, with Spain and Switzerland being the latest markets added to the list.
carsuk.net, automotiveworld.com

Electric buses in Poland: Solaris has won a bid to deploy four electric buses to the Polish city of Krakow. The Solaris Urbino 8.9 LE electric will go into operation by June next year.
newstix.de (in German), krakow.pl (in Polish)

French wallboxes made in China: Borne Recharge has entered a partnership in China to produce its EV charging equipment in a facility located in Zhongshan city. The site will become fully operational in 2016. Borne Recharge also cooperates with Nissan, Kia, and Renault.
automobile-propre.com (in French), English info via mail

Potential fuel savings: Fleet managers could save up to 500 pounds if they would switch to electric and hybrid vehicles, Kia writes in its ‘Fleet Market Attitudes.’ The survey also noted a lack of time and knowledge to identify most cost-effective vehicles.
fleetnews.co.uk