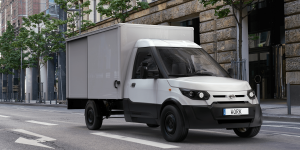 The Deutsche Post subsidiary StreetScooter has just presented the successor versions of its Work and Work L electric commercial vehicles. The new generation of vehicles hardly differs in appearance from its predecessor but has been technically upgraded in a number of decisive points.

Among other things, the box body has been redesigned, increasing the payload to over one tonne, and can theoretically carry up to four Euro pallets. The volume of the up to 3.16-metre long hold is now 7.7 cubic metres.

StreetScooter has also made quite a few changes to the drive technology. The maximum speed will increase from 85 to 120 km/h and that the new models can be charged to about 80 per cent in about five hours with the 11 kW charging system. StreetScooter has not yet provided details on engine power, range and battery capacity.

The prices for the new StreetScooter Work start at 38,450 euros net for only the chassis with a cabin, with the addition of the body box, the base price goes up to 42,750 euros net.

During the presentation of the vehicle in the premises of the future StreetScooter Showroom on the EUREF Campus in Berlin, CEO Jörg Sommer focused on features that are intended to make everyday work easier for delivery staff and drivers. In addition to the acoustic warning system AVAS and the automatic emergency call system eCall, these include a keyless access system and the passenger airbag. In addition – after feedback from many delivery staff – automatic air conditioning and seat heating for driver and front passenger now belong to standard equipment. There is also an infotainment system with DAB+ and connection to Apple CarPlay and Google Android Auto.

“StreetScooter is an early mover in the field of electric commercial vehicles,” says Sommer. “We, therefore, know from many years of experience and against the background of more than 100 million kilometres driven what is important in demanding delivery traffic and last-mile logistics”. This experience was incorporated into the new concept of the successful Work and Work L models.

Sommer is very interested in a successful premiere of the two important models. The Work L will not only serve as the basis for the expansion into China announced in September with Chery, and thus open up the large Chinese market for StreetScooters – The company must be made attractive for investors because a buyer or new partner has still not been found.

Post boss Frank Appel had recently increased the pressure again. In an interview with the German newspaper Frankfurter Allgemeine Sonntagszeitung, the CEO had to admit that this year there would be a loss with a “significant double-digit million amount“. Appel had repeatedly announced that he expected a solution for the future of StreetScooter by the end of the year. In the interview, he said, “Our investors want a logistics company, not a car company.”

StreetScooter CEO Sommer again stated that talks would continue. He is banking heavily on the project in China, where he estimates the market potential to be 2.3 million electric vans by 2025.

StreetScooter was born into a pioneering role when its parent company Deutsche Post, found no suitable electric vans in series production. Since then, the unintentional vehicle manufacturer has led a whole spate of other automakers to hurry up and get their electric vans to market. In the meantime, StreetScooter has some decent competition. Now, logistics companies like Hermes currently rely on the eVito from Mercedes, GLS is testing the use of MAN eTGE in Germany. The online giant Amazon is also going for the eVito in Germany. And in the USA, where StreetScooter plans to expand in the next two to three years, Amazon has recently ordered 100,000 electric delivery vans – from the US startup Rivian. StreetScooter’s last known major order was for 500 vehicles from the Japanese parcel delivery company Yamato.