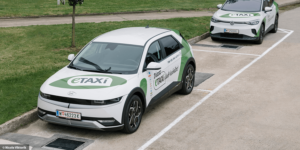 The eTaxi Austria project for testing automated conductive charging technology for electric taxis directly at taxi ranks is becoming concrete: Before the pilot operation starts, a project location has now been realised at the Wien Energie site at the Simmering power plant in order to implement various application scenarios in practice. 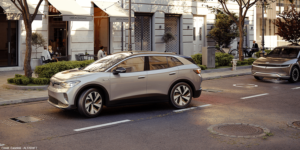 Easelink, the Austrian developer of the automated conductive charging solution Matrix Charging, has raised 8.3 million euros in its Series A funding round. The funding has been raised to further expand Easelink’s product team, deepen cooperation with the automotive and infrastructure industries and continue the implementation of a global charging standard.

In Vienna and Graz, the ‘eTaxi Austria Project’ is starting a large-scale test run to test a new type of charging-pad charging technology over the next two years. With the Easelink system, electric taxis can charge with a connection to a charging pad at the taxi rank. The approach holds much promise for fleet operators. 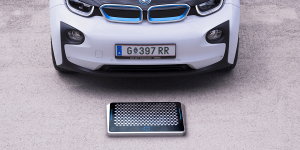 At Mission Innovation Austria Week 2019, the Austrian start-up Easelink demonstrated a fully automatic charging process in which payment is started via an app and settled via a blockchain application.

880-kW EV by Ariel: The British manufacturer has taken the wraps of its electric sports car at the Cenex Low Carbon event as planned. Codenamed P40, its most striking feature is a turbine range-extender. Production is scheduled for 2020, then with an actual chassis of course.
autocar.co.uk

Matrix Charging: To ease automatic charging, Austrian start-up easelink has developed a wireless conductive charging solution called Matrix Charging to debut at the IAA. It consists of a charge pad and connector that automatically connects to the pad. easelink says the conductive fast-charging happens at 43 kW (DC) and 22 kW (AC) and with 99 percent transfer efficiency.
easelink.com

Elektro Blitz: German start-up emobile-Transporter brings its first prototype of an electrified Opel (Vauxhall) van to the IAA. Based on the Opel Vivaro but renamed Elektro Blitz, it will hold three battery options, 43, 63 and 76 kWh, with a 100 kWh pack in the making. Diversity is also in the body as the young company follows Opel’s L2 line-up. Prices start from 62,225 euros.
elektroauto-news.net (in German)

Electric tractor concept: Indian manufacturer Escorts is working on an all-electric tractor as part of its New Escorts Tractor Series (NETS). While no details have been released, a serial version is allegedly due within the next 12 – 18 months and shall be offered in India as well as in other countries.
ndtv.com, moneycontrol.com, autocarpro.in