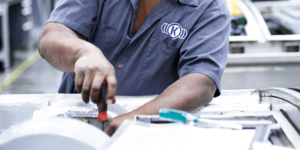 Knorr-Bremse has invested in the Chinese electric motor supplier Bobang and in return receives a company share of approximately 13 per cent. In addition to the investment, Knorr-Bremse is also planning development projects with Bobang.

Serious dreaming: Uber means it. The ride sharer is indeed working to build a network of flying electric cars (Will it be called haili?). It has now onboarded Mark Moore, an expert from NASA. He will lead development at Uber Elevate, where he will look into finding functioning VTOLs realistically.
bloomberg.com, theverge.com

EV cab in Mexico: Giant Motors is to cooperate with Moldex as they strive to make an electric car in Mexico. The model shall serve as taxi in Mexico City. A prototype is due for presentation at the end of this year and manufacture and sales shall start by 2018 already.
forbes.com

Hybrid chemical tanker: Norwegian Rederiet Stenersen AS ordered two chemical tankers with hybrid drive. The propulsion system comes from WE Tech, while Canadian Corvus Energy is to supply the Li-ion batteries called Orca ESS. Delivery of the first vessel is scheduled for Q2 this year.
electricvehiclesresearch.com

EcoTrain: Recuperation now exists in hybrid trains thanks to research by Deutsche Bahn and institutes in Dresden and Chemnitz. Of eight tested train concepts, the best was a diesel-electric series hybrid concept. It entails a brake control system by Knorr-Bremse that recovers energy from braking. The aim is to save up to 30% in fuel and DB scheduled 13 Desiro trains to utilise the concept.
knorr-bremse.de

VW microbus in Detroit: Rumours of a new member of the ID family have been confirmed as Volkswagen releases teaser images ahead of the Detroit Motor Show. It looks like it will indeed be a microbus and VW revealed it will have two electric motors, AWD and autonomous driving capability.
wardsauto.com, europe.autonews.com

Audi Q8 tease: The VW brand leaked images that show a near production-ready version of the Q8 SUV coupé prior to its debut in Detroit. Its front looks edgy but more importantly, the e-tron badge confirms that it will be offered in a hybrid variant from 2018.
autocar.co.uk, carscoops.com

Knorr-Bremse took over the electrical systems unit of Vossloh. With Vossloh Kiepe, the brake maker is adding drive technology for rail and commercial vehicles to its portfolio. The acquisition must be approved by the anti-trust authorities.
automotiveworld.com

Hyundai strengthens FCV: The next Tuscon Fuel Cell will boast 30 percent more range, 560 km to be exact and is due in January 2018 for about 50,000 dollars. One year earlier, Hyundai wants to launch a fuel cell bus – the same year Toyota designated to launch its own FCV bus, too.
nikkei.com

Mercedes A-class PHEV: An entry level Mercedes A-cards may be offered from 2018, Autocar learned. It will also be available as plug-in hybrid.
autocar.co.uk

Tesla update: Due to the volatile pound, Tesla will increase its UK prices by 5 percent from Jan, 1 2017. Existing owners may expect software update 8.0.2 within a few days. The new version shows amenities around Superchargers and links driver profiles to fob keys.
electrek.co (update), businessinsider.de (UK price)