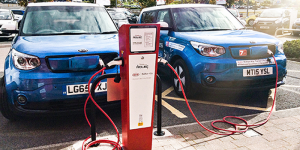 The English charging infrastructure manufacturer Rolec EV has delivered more than 1,000 charging points for electric vehicles to Kia in the UK. The devices will be installed at dealerships and will also be sold to customers. 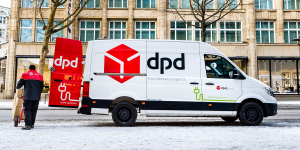 Rolec EV has been contracted by DPD UK to provide a smart EV charging network at 60 of its sites in Great Britain. DPD plans to grow their EV fleet to over 550 vehicles by 2021, so they will have to install over 600 charge points to accommodate this. 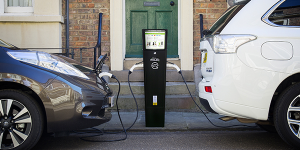 Lincolnshire based Rolec EV, a manufacturer of charging points, is aiming to increase production capacity by over 200 percent. They announced the opening of a new factory complex in order to do so and also the creation of a further 50 full-time jobs.

32 new BMW i3 with range extender are joining the fleet of Bavaria’s public authorities. They will be distributed among the state’s construction authorities and the motorway directorate. In order to erect almost 190 new charging stations at the new fleet bases, the Bavarian state invests additional 3,8m euros. The stations shall enable visitors to charge their EVs for free while they deal with their affairs.
stmi.bayern.de (in German)

Always up-to-date charging data: UK-based Rolec EV has developed a smart technology platform that integrates real-time charge point data such as availability, costs and power consumption. The so-called UltraSMART technology platform is a further development of the company’s former independent smart charging solutions that have now been merged into an all-in-one package.
fleetnews.co.uk

Like Airbnb, but for EVs: Charger company EMotorWerks seeks to link EV drivers with owners of home charging stations and thus tests a distributed, peer-to-peer charging marketplace in California. The start-up has launched now a beta test of its project. As reported, the San Carlos-based company works with the Share&Charge blockchain platform developed by MotionWerk.
greentechmedia.com

Germany to fund e-buses: Faktor 100 is a new programme adopted by all environment ministers of Germany’s federal states to deploy more electric buses in public transport. The name comes from the notion that one electric bus can save emissions equivalent to 100 cars. The plan requests 50m euros from the government in 2018 and 100m euros in each of the following years. This means 250 zero-emission buses could hit German roads next year, followed by 500 vehicles annually from 2019. While public transport providers welcomed the decision, they pointed to producers to offer more and more price-competitive electric buses.
roter-renner.de (in German)

Shop & Charge: Fashion retailer Next and Rolec EV have agreed to offer British shoppers EV charging opportunities. The infrastructure company will therefore extends its installations across Next’s retail network. Users shall be able to use them trough their mobile phones instead of traditional RFID cards.
fleetnews.co.uk

250 parking spots with charging function: Finish pension insurance company Varma and EV charging specialist Parking Energy are currently installing charging infrastructure at no less than 250 parking spots next to Varma’s head office in Salmisaari, Helsinki. In summer they shall be ready to use.
varma.fi

Free car sharing at public housing sites: Residents of three public housing areas in Sacramento are about to benefit from a small fleet of Zipcars free of charge. The pilot project, initiated by the city, includes eight electric Kia Souls for which up to 300 people in the estates can apply for on-demand access.
sacbee.com, capradio.org

TV service provider orders 100 Model X: Layer3 TV intends to renew its fleet through 100 Tesla Model X. The Denver-based company says it would purchase the vehicles by the end of the year.
teslarati.com

Hundreds of millions for emobility: The UK government announced that it will invest as much as 390m pounds in electric and autonomous mobility. 150m pounds have been earmarked to purchase 550 new electric and fuel cell buses, as well as push electric taxis. Another 1,500 will be made more environmentally friendly. Furthermore, 80m pounds will be reserved for charging infrastructure.
businessgreen.com, uk.reuters.com, gov.uk

VW installs 290 fast-chargers in the U.S.: As part of its redemption following the diesel scandal, Volkswagen is upgrading EV infrastructure along major highways and in cities. A total of 290 will be installed. VW still hopes to get a partner on board.
automobilwoche.de (in German)

Parks go green: Rolec EV and the National Trust, a conservation agency for historic sites and green spaces in the UK, have signed a deal to set up chargers for visitors as well as wallboxes for staff at a number of National Trust locations.
zap-map.com

Federal support: Plug In America and the University of Rhode Island received 500,000 dollars in funding from the U.S. Department of Energy, to support the project “Advancing PEV Adoption in New England.” The goal is to push EVs in Connecticut, Massachusetts, Rhode Island, as well as in Vermont.
gas2.org, uri.edu

Charge on the fly: POD Point announced a deal with car park operator Airparks for the installation of two EV chargers at both the airport in Birmingham and Luton. The stations will be free to use, though parking fees apply. Travelers can also use a valet service and request the battery to be full upon their return.
businessgreen.com

Electric buses for Hamburg: The city only wants to buy zero emission vehicles from 2020, which is why Hamburg’s transportation agencies have signed a partnership with bus manufacturer MAN. Together they want to develop especially fit electric and fuel cell buses. MAN will already show an articulated bus concept at the IAA in Frankfurt.
man.eu (in German)

Renault and Nissan in the UK: Renault delivered 55 Zoe to Europcar UK, which is looking to electrify 5 percent of its fleet by 2020. It is Renault’s biggest order in the UK to date. Nissan meanwhile sold its 15,000th Leaf on the Isles and now offers a 500-pound rebate for private buyers of the Leaf or e-NV200 until the end of September.
electriccarsreport.com (Renault), nissaninsider.co.uk (Nissan)

V2G research project is looking for drivers: The successor of the My Electric Avenue programme in the UK, Electric Nation, will look at the effects of EV charging on the local grid. It is still looking for some 500 to 700 EV and PHEV drivers to take part. Participants will get an intelligent charger for free.
fleetnews.co.uk

E-Carsharing: GreenCommuter will kick off its carsharing scheme with 20 Nissan Lean in Chattanooga, Tennessee, in the coming weeks. The city has already had an all-electric shuttle bus in service for 26 years.
timesfreepress.com

Paying per mobile: Rolec EV has developed a new management system for EV chargers called ‘EV Charge Online.’ It will allow users to pay via their smartphone when at the charger, getting rid of some of the hassle many EV drivers sill face when plugging-in.
roleserv.com

Charging flatrates: Clever and BMW now offer buyers in Denmark a charging flatrate for newly purchased EV and PHEVs. For example, i3 driver would pay about 80 euros per month for “Clever Unlimited” and would get a home charger plus installation, as well as access to some 750 public chargers across Denmark, Sweden and Germany. Drivers can also choose a cheaper package and not get a home charger.
clever.dk

Solar carport with access control: German company wallb-e introduced its solar carport sun4charge, featuring two 22kW AC charge points. Drivers can plug in using their RFID card of via an app, meaning the concept is also feasible for utilities. There is also a sun4charge variant for e-bikes.
wallb-e.de (in German)

Going EV: Arizona Public Service (APS) is looking to successively replace its 2,138 vehicle strong fleet with electric and hybrid cars – starting with where it makes the most sense economically. The fleet consist of car, utility vehicles, as well as forklifts. Some buckets trucks have already been switched out.
dcourier.com

Seoul dreams electric: The city government considers adding to its all-electric fleet from 2017 to include models from KIA (Soul and Ray), as well as the Hyundai Ioniq. Moreover, Korea Electric Power is to set up rapid chargers in the city. How many EVs or chargers are in the cards, was not announced.
yonhapnews.co.kr

Charging at home: NHS Fleet Solutions cooperates with Rolec EV, which was announced as the official home charging point supplier and will install chargers for salary sacrifice drivers. Rolec EV offers the so-called ‘enquiry to installation,’ allowing NHS Fleet Solutions to follow every stage of the installation.
evfleetworld.co.uk

News from Tesla: The EV pioneer is building a new showroom combined with a service-centre and a row of Superchargers in Rocklin, California, with a massive array of photovoltaic solar cells to power the entire site. Meanwhile, Tesla hopes to be allowed to open as many as twelve of its stores in Texas.
greencarreports.com (California), wfaa.com (Texas)

Taking a back seat: Kia wants to refrain from bringing electric and hybrid vehicles to Australia, as long as there are no clear signs from the government. At the moment, there are no plans for subsidies, nor policies that would push for the development of charging infrastructure.
themotorreport.com