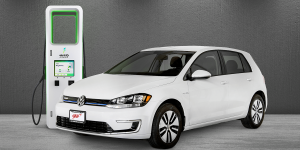 CA massively invests into clean air: Not less than 895m dollars shall help to further extend the range of measures against air pollution in California. This sum, approved by the state’s legislature, is part of the „California Clean Air Initiative“ and shall enable e.g. to create incentives to replace old diesel-powered trucks and buses, to grant EV purchase discounts and to promote EV car-sharing.
greencarcongress.com, businesswire.com

First BYD buses for Italy: Chinese manufacturer BYD has delivered the first trio of all in all 23 electric-powered 12 metres buses to Turin, after having won the tendering in September 2016. 20 units will hit the road in Turin, 3 close to Novara.
byd.com

Porsche brings ultra fast-chargers in the U.S.: After Porsche has opened the first public charging site featuring its liquid-cooled 800 Volt technology in Berlin, six of such ultra fast-charging stations could now be erected in the States, too: Porsche just obtained a building permit at its headquarters in Atlanta.
electrek.co

Electric airport shuttle buses: The Sacramento International Airport can count on a 2m dollars federal grant in order to introduce a fleet of electric shuttle buses, delivered by Proterra. The grant will cover half the cost of five buses and charging infrastructure. Delivery is scheduled for next year.
sacbee.com

Zero-emission buses for Honolulu: Also Honolulu won more than 1.4m dollars in federal funds to build up an electric bus fleet and chose California-based bus manufacturer Gillig LLC to supply the electric vehicles. The Hawaiian Electric Company will install the infrastructure for up to five buses.
hawaiinewsnow.com

210,000 charge spots in Shanghai: The Chinese harbour metropolis is fast becoming China’s model EV city. 210,000 charging facilities are to stand by 2020 with both the authorities and businesses making an effort. Currently most new energy vehicle drivers charge at the workplace but wish to see more opportunities to rejuice in residential areas as well. There are about 30 charge point operators in Shanghai at the moment with fees often paid via mobile app/s.
shanghaidaily.com

Paris ePrix is to generate energy even after the heat of the race is over as the Formula E leaves behind a glycerine generator. It produces electricity from a diesel by-product clean enough to drink and can be used to power buildings or EV charging stations. It sure prove of use to Swiss pilot Sebastien Buemi, who scored yet another victory in this Formula E season last weekend.
automobilsport.com (generator), motorsport.com (ePrix)

A first for India: The city of Nagpur wants to electrify the entire cab fleet. A pilot will start later this week with 200 electric taxis provided by the municipal government. The vehicles have yet to be confirmed but will likely be either e20 Plus or the e-Verito.
thestatesman.com

Share a bike in Sacramento: 900 bicycles will become available in California’s capital with the first 50 having launched already through Social Bicycles. The company plans to make 900 available, 100 of them electric by November but is still seeking sponsors.
sacbee.com

Germany to fund e-buses: Faktor 100 is a new programme adopted by all environment ministers of Germany’s federal states to deploy more electric buses in public transport. The name comes from the notion that one electric bus can save emissions equivalent to 100 cars. The plan requests 50m euros from the government in 2018 and 100m euros in each of the following years. This means 250 zero-emission buses could hit German roads next year, followed by 500 vehicles annually from 2019. While public transport providers welcomed the decision, they pointed to producers to offer more and more price-competitive electric buses.
roter-renner.de (in German)

Shop & Charge: Fashion retailer Next and Rolec EV have agreed to offer British shoppers EV charging opportunities. The infrastructure company will therefore extends its installations across Next’s retail network. Users shall be able to use them trough their mobile phones instead of traditional RFID cards.
fleetnews.co.uk

250 parking spots with charging function: Finish pension insurance company Varma and EV charging specialist Parking Energy are currently installing charging infrastructure at no less than 250 parking spots next to Varma’s head office in Salmisaari, Helsinki. In summer they shall be ready to use.
varma.fi

Free car sharing at public housing sites: Residents of three public housing areas in Sacramento are about to benefit from a small fleet of Zipcars free of charge. The pilot project, initiated by the city, includes eight electric Kia Souls for which up to 300 people in the estates can apply for on-demand access.
sacbee.com, capradio.org

TV service provider orders 100 Model X: Layer3 TV intends to renew its fleet through 100 Tesla Model X. The Denver-based company says it would purchase the vehicles by the end of the year.
teslarati.com