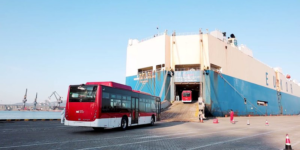 Commercial vehicle manufacturer Foton announces a significant order for electric city buses from Chile. The capital of Santiago de Chile expects 1,022 zero-emission buses to arrive, making this the biggest overseas order the Chinese company has ever had.

A further 150 BYD electric buses went into service in Santiago de Chile, bringing the total number of BYD electric buses in Chile to 455. Among other things, the new bus shipment will serve Avenida Bernardo O’Higgins, known as Alameda, in the historic part of the city.

Nissan has launched Latin America’s first bi-directional charging system in Chile in cooperation with Enel X and the Energy Sustainability Agency. In addition to the Nissan Leaf, a 3 kW solar panel will also be used for the Vehicle-to-Grid project.

BYD of China have never received a larger electric bus order from the Americas. Santiago de Chile expects the delivery of 100 all-electric buses in November. The order is in cooperation with energy firm Enel and builds on a successful trial.

Clean Air Zones: Until 2020, so-called Clean Air Zones are to be established in Birmingham, Leeds, Nottingham, Derby and Southampton to reduce air pollution. Within the boundaries of these zones, drivers of conventional buses, lorries and taxis will have to pay a toll.
bbc.com, gov.uk

Pod Point fully funded: The British charging infrastructure provider Pod Point successfully raised 1.75m pounds through crowdfunding. Both online campaigns (we reported) are still open. The company wants to roll out ‘top up’ charge points, where EV drivers can park for an hour or more.
evfleetworld.co.uk

Atlas EVSE: Ever Win International has founded a charging equipment unit called Atlas EVSE. First products are expected in January at the CES in Las Vegas. The sub-unit is said to focus on residential Level 2 charging with up to 30 Amps.
pr.com

E-taxis in Santiago: Three electric taxis from BYD have gone into operation in Santiago de Chile. Chilean utility Chilectra will supply the electricity to the three BYD e6 taxis free of charge for the first year.
automotiveworld.com