Siemens has opened an “advanced robotized and digitized” battery module factory in Trondheim, where 55 battery modules will be assembled per shift for  marine and offshore markets. The factory comprises a line with eight robot stations and a capacity of up to 300 MWh per year. 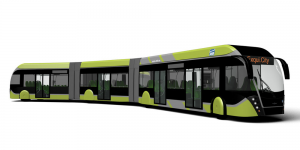 The Belgian busmaker Van Hool says it is the largest trambus order in its history as the Norwegian city of Trondheim orders 58 hybrid vehicles. The 24 metre long blend of a bus and a streetcar is to arrive in Norway by mid-2019.