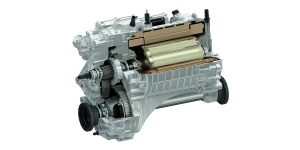 In the USA, Magna is now working with the Illinois Institute of Technology and the University of Wisconsin-Madison to develop an electric motor with a significantly higher power density and lower costs. The project is funded by the U.S. Department of Energy.

Stationary storage by Tesla: The official premiere was scheduled for next week, but Bloomberg says it already knows what the Californian EV maker will present: a battery pack for home energy storage as well as a bigger version for commercial applications. The report further states that Wal-Mart and Cargill could be among the first customers for the stationary Tesla batteries.
bloomberg.com

Find New Roads details: The unusual concept Chevrolet brought to Shanghai is slowly revealing its being. What Chevy calls dragonfly doors are just one feature of the autonomous and all-electric concept car that comes equipped with four magnetic hubless wheel motors and wireless charging.
gizmag.com, mashable.com

Battery imaging: Researchers from the University of Wisconsin-Madison and Brookhaven National Laboratory have visualised electrochemical reactions in lithium-ion batteries containing iron fluoride. To do so, they used a novel X-ray imaging technique.
phys.org, theengineer.co.uk

Most clicked link on Wednesday was the “Ultimate Drag Race” that had the Energica EGO, Zero S, Tesla Roadster and Tesla Model S P85D all compete in one show.
youtube.com