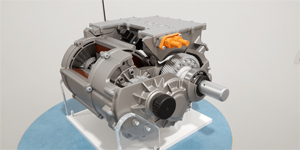 Bosch wants to grow together with the EV market and hopes for its “all in one” drive concept e-Axle to become a “major coup” according to board member Dr. Rolf Bulander. On display at the IAA this year, the powertrains will roll off the production lines from 2019.
bosch-presse.de

Montage of a rack: Efficiency may be gained in a number of ways and so the EU looked into the racks that carry EV batteries. Project OPERA4FEV (Operating rack for full-electric vehicle) managed to repackage cells in a robust plastic envelope and thus got rid of intermediate housing, while integrating electrical and hydraulic connections as well as components in the new solution. The 11-member consortium’s work resulted in cheaper, safer and more environmentally-friendly racks.
cordis.europa.eu

NCM batteries reloaded: SK Innovation will commence commercial production of pouch-type batteries made from nickel, cobalt and manganese that would allow a range of up to 500 kilometers for electric vehicles. Starting in December this year, the so-called NCM811 will first be supplied for energy storage systems, while EV makers may get their hands on the batteries from Q3 2018.
koreaherald.com, koreajoongangdaily.joins.com, businesstimes.com.sg

Electric CV joint venture: UQM and CNHTC plan to to manufacture and sell electric propulsion systems for commercial and other vehicles through a JV in China. CNHTC’s subsidiary Sinotruk is expected to be the first and largest client, once the two-stage agreement has gone through.
greencarcongress.com

Popular electric drivetrain: This autumn, UQM will release its new drivetrain system PowerPhaseDT for electric utility vehicles (we reported). The industry is already showing interest, with Hybrid Kinetic Group, Wuzhoulong Motors and ITL from China, as well as ADOMANI from the U.S.all ready to place their orders.
greencarcongress.com

3-D printed batteries: Researchers from Taiwan have successfully printed a magnesium battery in just minutes. Using a synthetic magnesium powder as anode material, they were even able to increase capacity to more than 600mAh/g. The same method could be used to increase the capacity of lithium batteries to 200 mAh/g.
3ders.org

Electric hub-drives for the military? The U.S. Defense Advanced Research Projects Agency (DARPA) is investing 2.7m dollars in British developer QinetiQ and its hub-drive technology. There is apparently much potential for the system when it comes to military vehicles. The money will be used to go from the concept to the test and prototype stage.
greencarcongress.com

South Korea and Iran join forces: Representatives from both countries have opened a joint centre for the exchange of technical know-how in Teheran. The goal is to cooperate on a number of projects in the future, including in the field of electric mobility.
tehrantimes.com

Olli and Watson: Local Motors and IBM have developed a self-driving electric bus called Olli. It sits 12 and thanks to the integrated computer system Watson, passengers can ask the bus questions (and get an answer). The electric Olli is now on the road in Washington, D.C. and is said to also come to Miami and Las Vegas.
popularmechanics.com

Tel Aviv tests electric road: Israeli start-up ElectRoad has developed a technology that charges EVs while driving, using copper wire embedded in the asphalt. Test are currently under way on a specially prepared route. The embedding of the copper wire is said to take about one day per kilometre.
israelbetweenthelines.com (with video), jewishbusinessnews.com

New UQM drivetrain: UQM Technologies announced a new electric drivetrain for utility vehicles, called UQM PowerPhaseDT, and which is said to be available from this autumn. Eaton has been picked to supply the transmission, while Pi Innovo will contribute the transmission control unit.
greencarcongress.com, businesswire.com

Meeting demand: Japanese Showa Denko (SDK) announced an increase in production capacities for its carbon-based anode material for Li-ion batteries from the end of 2016. Production capacities will be raised 50 percent to annually 1,500 tonnes. Part of the production will be moved to China.
acnnewswire.com

H2 utility vehicle alliance: Hydrogenics and SinoHytec have signed a strategic partnership for the development of fuel cell systems for the Chinese market. The FCs are destined for buses and trucks.
gasworld.com

Hiring freeze for project Titan? Just yesterday we reported that head developer Steve Zadesky left the Apple-car team. Now AppleInsider has learned that the technology giant stopped hiring for the project all together, after design chief Jony Ive left as well. He was allegedly unhappy with the project’s slow progress.
appleinsider.com

Zero emission yacht premiers: A collaboration between Nimbus Boats Sweden and electric motor manufacturer Torqeedo (we reported) is bearing fruits. The two showed off their all-electric Nimbus 305 Coupé E-power at the ongoing boat trade fair in Dusseldorf, Germany. The yacht can already be ordered.
boot.de (in German)

Logistical SiFi: Swiss cargo transport is said to go underground as part of the project “Cargo sous terrain.” Unmanned electric vehicles will transport goods through tunnels on inductive rails. The first stretch will be completed by 2030 and will reach from Geneva to St. Gallen. Partners to the project include Coop, Migros, Swisscom, Post, SBB and Mobiliar.
srf.ch, derbund.ch (articles in German)

Gigafactory proceedings: Apparently, Panasonic is interested in investing in Tesla’s battery factory, signing a letter of intent. Constructions of at least one of the two possible Gigafactory sites will commence as early as next month, with California being back in the game. Musk also said that the limited cell production is currently keeping Tesla from producing more Model S.
bloomberg.com (Panasonic), transportevolved.com (ground-breaking)

Future Leaf: Nissan released further details about the next Leaf, due to arrive in 2017. As it has been reported before, it might feature multi-size battery options with packs enabling 300 km of range. This will be made possible by introducing a new battery chemistry and thus improving energy density. 2017 will also see the arrival of Infiniti’s delayed electric car.
electric-vehiclenews.com, treehugger.com

Texas EV incentive: As soon as mid-May, 2,000 buyers and lessees of EVs and plug-in hybrids in Texas might be able to apply for a 2,500-dollar rebate. Both EVs and PHEVs will receive the full amount, as long the battery capacity is at least 4 kW. In case of a lease, the contract runs for four years.
chargedevs.com

Pictures of the C-Class plug-in hybrid emerged on Autoblog, showing the Mercedes being tested in Germany. The spy shots clearly show the position of the charging inlet, located at the rear-end bumper just like on the plug-in S-Class.
autoblog.com

UQM for Turkey: Colorado-based UQM has signed a memorandum of understanding with Turkish Derindere Motorlu Araclar to supply drive systems to be used in an all-electric light commercial vehicle. While the vehicle is still under development, a decision has been made already in favour of UQM’s 135 kW propulsion system.
businesswire.com

Say Hello to KWID: Renault unveiled its latest concept at the Auto Expo India. The sturdy chassis and the oversized wheels give the Kwid a buggy-look. The interior is inspired by a bird’s nest with wing-like doors, opening up electrically. Speaking of birds – Kwid comes with an integrated drone, which can be used for personal traffic surveillance. Powered by a petrol engine for now, Kwid is “Z.E. ready,” meaning there is space for a battery and the plug is already integrated.
indianautosblog.com, green.autoblog.com, technologicvehicles.com (With videos)

Hybrid Diesel: Mahindra is presenting its XUV500 hybrid at the Auto Expo India. The SUV comes with a diesel engine assisted by a permanent magnet synchronous motor that gets its energy from a li-ion battery. Equipped with a manual transmission, Mahindra claims the XUV500 hybrid will save up to 18% on fuel compared to its diesel-only version.
indianautosblog.com

Hero Scooter: At its home show Auto Expo, Indian manufacturer Hero is displaying two hybrid scooters. With the Leap Hybrid SES being at preproduction stage, the Hero RNT is still a concept. The Leap is in fact an e-scooter featuring a 124cc range extender. The hybrid drivetrain in the RNT is realised by a diesel engine powering the rear and an electric motor powering the front wheels, thus making it an all-wheel drive bike.
technologicvehicles.com (With videos)

Honda Civic sale start: Honda’s 2014 version of its Civic hybrid is now available all over the U.S., starting at 24,635 dollars. Next is the updated Civic powered by CNG, which is expected ten days later and will be available from 26,640 dollars.
green.autoblog.com, greencarcongress.com

UQM capital rise: Colorado-based UQM Technologies, developer of drivetrains for electric vehicles, has announced that it successfully raised its capital by 5.3m dollars through institutional investors. The money will be mainly used for potential joint ventures and capacity expansions.
businesswire.com

Pantherwerke down: German (electric) bicycle manufacturer Panther has filed for insolvency. While based in Germany, it operated factories in Eastern Europe. The Lithuania plant was sold in November last year and the company continues to trade as BV Cycles GmbH from Germany. What effects the bankruptcy will have on other Panther operations is uncertain.
bike-eu.com

Winter charging problem: Tesla received numerous complaints from Norwegian Model S drivers having trouble charging. Apparently, the portable UMC (universal mobile connector) does not hold the connection if it gets real cold. Replacement UMCs Tesla sent, did not resolve the issue. The Californians are now trying to adapt their equipment to Norway’s grid.
insideevs.com, teslamotorsclub.com, dagbladet.no (In Norwegian)

Indonesian electric bus: The American UQM Technologies reports that its PowerPhase Pro system is used to drive an all-electric bus in Jakarta. The e-bus by PT Sarimas Ahmadi Pratama is part of the goal of Indonesia’s government to start mass-production of e-cars and e-buses this year.
wsj.com

U.S. consumers less car-keen: A report by the University of Michigan Transportation Research Institute (UMTRI) found a proportional increase in American households without a car. However, this trend varies greatly between America’s 30 largest cities. New York showed the strongest increase with 56.5% while in San Josè car ownership remained most steady (5.8%).
greencarcongress.com