America loves the Leaf: Nissan is increasing output of its Leaf by about 50%, now producing 3,000 units a month at its plant in Tennessee. The surge in demand is bolstered up by the growing charging infrastructure as well as customers are increasingly becoming aware about the cost benefits of EVs.
reuters.com, electric-vehiclenews.com 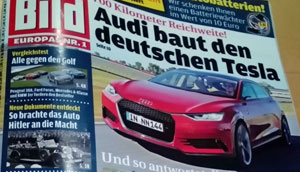 German Tesla-Fighter? The German car magazine ‘Auto Bild’ reports in its print edition about Audi’s plans of an upcoming electric Audi Q8 with a range of up to 700 kilometres. While details are yet scarce, the Q8 with an expected price of at least 100,000 euros (136,000 dollars) is believed to be a direct answer to Tesla’s upcoming Model X – but at least two years later.
‘Auto Bild’ No. 2/2014 p. 10, bild.de (In German)

Hyundai readies FCEV: This spring, Hyundai will introduce its Tucson Fuel Cell vehicle to the US market, initially in the Los Angeles region. The IX35 FCEV, as it is known in Europe, comes with a range of up to 300 miles and refuelling will only take ten minutes. Hyundai launches the FCEV in California as the state recently agreed to build one hundred H2 fueling stations.
electricvehiclesresearch.com

Six million hybrids: Toyota hit yet another milestone right at the end of 2013 when billing 6,072 million hybrids. This last million took Toyota only nine months after celebrating five millions in April ’13. The Japanese currently offer 24 hybrid models and one plug-in hybrid worldwide with another 15 in the pipeline.
thegreencarwebsite.co.uk, greencarcongress.com

Volt owners test Caddy ELR: Is a fancy name and hefty price tag enough to make a difference? Two Volt owners set out to drive the Cadillac ELR, which has the Volt system under the hood. Both drivers found the Electrified Luxury Coupe (ELR) to be “luxurious” indeed.
cleantechnica.com