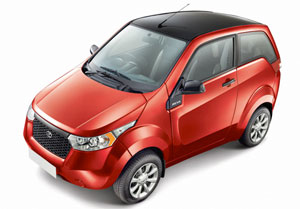 Mahindra’s many EVs: The company has now announced to exhibit a new electric sports car concept called HALO along with its Formula E racing car at the upcoming Auto Expo in India. Furthermore, Mahindra will have a fast-charging version of the e2o (photo), the new Verito electric sedan and Maxximo electric light truck on display. The latter two are set for commercialisation at the end of this year.
indianautosblog.com

Zero S copy? The electric super-bike presented by Terra Motors as the Kiwami a few days ago in India (we reported), seems to be a re-badged Zero S from California. When asked, Zero Motorcycles said that it does not have any licensing agreement with Terra Motors and plans on seeking “legal remedy.”
green.autoblog.com

Electric Mini in the making: Peter Schwarzenbauer, BMW’s board member in charge of Mini, said to German Wirtschaftswoche, that the electric drive is essential for a city car like the Mini. First prototypes are already being built but a decision on the final design has yet to be made.
wiwo.de (In German)

Drive less, pay less: Renault offers a new Zoe deal for its UK customers. Based on a three year contract with 3,000 miles per annum, the battery hire price goes down to 45 pounds (74 dollars). So far, the cheapest option was priced at 70 GBP (115 USD) with 7,500 mi per year. A 7 kW wall charger is complimentary for all Zoe buyers.
thegreencarwebsite.co.uk, electriccarsreport.com

Tuning Tesla: Californian tuning specialist, Saleen Automotive, has set eyes on electric cars and is currently drafting a high-performance Model S. While details are yet unknown, it is expected that Saleen might twist the suspension and come up with some stylish bodywork.
motorauthority.com, greencarreports.com, electriccarsreport.com

Sport Quattro Concept review: Georg Kacher got hold of Audi’s latest hybrid concept and put it to the test against its ancestor, the “Ur Quattro,” as he calls it. Even though he could only drive a pre-prototype, Kacher found out it “is much further down the road to production than the PRs would have us believe” and calls on all “bean counters” (on the Audi board) to just “drive it” if still in doubt…
carmagazine.co.uk