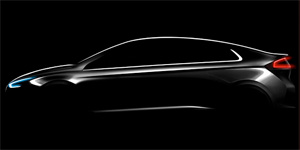 Hyundai teases multi-powertrain car: The Ioniq will be the first vehicle ever available with three different electric drivetrains – all-electric, hybrid, and plug-in hybrid. Hyundai now confirmed the name, also releasing a teaser image showing a sleek new design. The car will launch in South Korea in January, followed by its European presentation at the Geneva Motor Show in March.
koreatimes.co.kr, autocar.co.uk

Volvo hints at S90 coupé: Speaking to the Swedish carmaker at the S90 launch in Gothenberg, Auto Express reports that Volvo may be looking to introduce a coupé variant of the S90 in 2020. The magazine predicts that it would then also be available with as a T8 plug-in hybrid and maybe even as a pure EV, as Volvo previously suggested an all-electric car by 2019.
autoexpress.co.uk

Subaru hybridises sports car: The Japanese carmaker will offer its WRX STI with a hybrid drivetrain from 2017, Motoring has learned. It will also test a plug-in variant, which could go on sale by 2018.
motoring.com.au

Audi Q7 e-tron reviewed: According to Ryan Borroff, it could be the “the best hybrid yet at fulfilling the promise of greener motoring,” due to its Predictive Efficiency technology, which maximizes use of the electric motor. Still, “the driving experience is a little cold.” Because hybrid or not, it remains a 4×4.
express.co.uk

Toyota G’s: The Japanese carmaker took the wraps off the Noah G’s and Voxy G’s concepts ahead of the 2016 Tokyo Motor Show. Both “souped-up minivans” can be ordered with a hybrid drive. Specifics about performance or fuel consumption have not yet been released.
worldcarfans.com