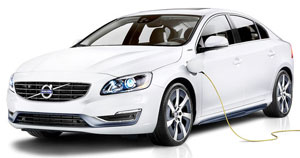 All-electric Volvo: The Swedish carmaker plans to build a 500-kilometre range EV to be launched by 2019. Furthermore, Volvo will offer a plug-in hybrid version of every model in its line-up, starting with Volvo series 60 and 90. By 2020, Volvo estimates 10 percent of its global sales will be electrified models.
autocar.co.uk, europe.autonews.com

Mitsubishi electrifies: By 2020, the Japanese want to include five SUVs in their range with four of those being offered electrically or as PHEV. The ASX is a candidate for pure electrification, while a new PHEV is to sit between the ASX and Outlander, eventually together with a hybrid Shogun Sport.
autocar.co.uk

Tesla 7.0 in detail: The Autopilot allows Model S to steer within a lane, change lanes, and manage speed by via traffic-aware cruise control. It can also scan for a parking space and parallel park on command. Digital control of motors, brakes, and steering helps to prevent collisions.
forbes.com, teslamotors.com, jalopnik.com (with video)

New Leaf for X-Mas: The new Nissan LEAF with a 30kWh-battery will be available in Great Britain from December 2015. Prices start from 24,490 pounds (37,777 dollars). It will be produced alongside the smaller battery version at Nissan’s Sunderland factory in the UK.
autovolt-magazine.com

Recall order: Germany’s automobile regulator (KBA) ordered Volkswagen to recall 2.4 million diesel vehicles in the country. VW later expanded that recall on its own terms to include 8.5 million diesel cars in Europe. In the U.S., the EPA is holding back its recall order as it will first conduct testing of its own to see if VW’s proposed fix is effective. EPA announced further emission testing on diesel and petrol powered cars by other carmakers, too.
nytimes.com, euronews.com, detroitnews.com (EPA)

PEV sales in the UK.