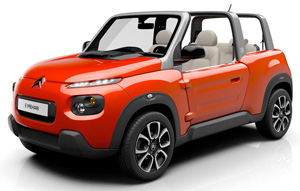 Citroën presents the electric Mehari at COP21 in Paris. The EV is based both on the Cactus and the Bluesummer convertible concept by Bolloré (we reported). The 50-kW motor delivers a top speed of 68 mph and is driven by a 30 kWh battery that lasts for 200 kilometres. On sale is set for spring 2016.
worldcarfans.com, insideevs.com, carscoops.com

1m electrified cars by 2020: South Korea set its million target within the decade as the government wants to push sales of electric and hybrid cars to reach 20 percent of all new cars. To reach the ambitious goal – electrified cars currently count for two percent of the market in Korea – 150 billion won (127.5m dollars) will be spend on R&D and some 1,400 charging stations will be built across the country.
english.yonhapnews.co.kr

VW to electrify the U.S.? The new leaders of Volkswagen met with its third-largest shareholder. The Qatar Investment Authority (QIA) that holds a 17 percent stake in VW expects answers to the diesel-rigging scandal such as a multibillion-dollar campaign to promote electric vehicles in the United States.
reuters.com, businessfinancenews.com, bild.de (original source, in German)

BMW i8 convertible: At CES in Las Vegas BMW plans to show its sporty hybrid i8 as a convertible Spyder concept but one that is almost production ready. Minor changes to the drivetrain and battery are expected to increase range although the show car will be focussed on displaying on-board technology.
autoexpress.co.uk, autocar.co.uk, worldcarfans.com

Want to work for Tesla? More than 1,600 job openings are currently posted on the Californian EV makers website. As Tesla sets course for expansion it is looking for sales and service personal as well as a skilled radar engineer and managers in all its markets.
bloomberg.com, chc.tbe.taleo.net (job listings)

Formula E to be displaced: The German round of the electric racing series will not take place at Berlin’s Tempelhof airport as hangars are a temporary home for refugees fleeing the war in Syria. The Nuremberg Norisring is an option currently discussed as well as Munich or a different track in Berlin.
autosport.com