VW expands electrification: Volkswagen’s push for electrification gains another dimension as the carmaker plans to introduce an electric bike featuring ABS and a VW drive system. Furthermore, the Last Mile Surfer scooter on three wheels is about to go serial, too, Automobilwoche reports.
automobilwoche.de (in German)

Tesla ‘Launch Mode’: The Californian EV maker released a firmware upgrade for all drivers of a performance Model S. The ‘Launch Mode’ enables even faster acceleration from a standstill, while traction and power control is computerised.
teslarati.com 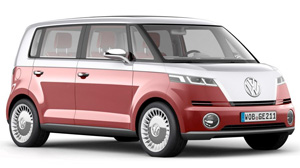 Microbus update: Volkswagen will reportedly bring an electric van concept to CES in Las Vegas next year. auto motor und sport suspects it to be dubbed Budd-E. VW filed a patent for the name and for the term ‘ConnectedVan.’ The latter is includes a new control and infotainment system.
auto-motor-und-sport.de (in German)

Pimp my Prius: Tuner TOM Racing previews its upcoming bodykit for the new version of the Toyota hybrid. The metal dressing adds a lot more spice with blacked out elements, a new front lip and updated bumper. The more aggressive look is rounded up with a lower suspension.
carscoops.com

Ford Fusion PHEV: The Americans will show an updated sedan at the Auto Show in Detroit next month. The main change for the Fusion otherwise known as Ford Mondeo will be the introduction of an updated plug-in hybrid version with the Fusion Energi.
carscoops.com