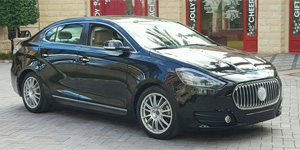 Tesla clone: 2050 Motors now offers the Chinese Ibis EV in the U.S. While the all-electric sedan has previously been accused of being a Tesla copy, 2050 Motors stresses the differences. The Aoxin Ibis is made of carbon fibre, featuring a 72 kWh battery. At 59,000 dollars, it is also cheaper than a Tesla. Still, it looks like a squashed version of the Californian bestseller.
globenewswire.com, 2050motorsinc.com (photos and video)

Extended BMW X1? Spy shots show a long version of the X1. The pictures also reveal a charge port, letting on that BMW is preparing a plug-in hybrid version. The “hybrid test vehicle” sits seven people. It will be exclusively sold in China and built by the BMW joint venture Brilliance.
worldcarfans.com

Outdoor Outlander concepts: Mitsubishi will show two new versions of its PHEV at the Tokyo Auto Salon. Both the Active Camper and Gear Concept feature colourful highlights and come with outdoor advancements, such as a better suspension and a bike rack on the roof.
worldcarfans.com, carscoops.com

Recall: BMW is calling 16 hybrid i8 back to garages in the U.S. due to a problem with stability control that might lead to braking and balance errors. The vehicles in question were produced between May 29th and June 5th of last year.
electriccarsreport.com, autoblog.com

Fusion pricing: Ford has facelifted its Fusion series, cutting prices at the same time. The Fusion Energi SE Luxury plug-in version is priced at 33,995 dollars, 780 dollars less than before. If opting for the Titanium model, it becomes even 1,610 dollars cheaper. Prices for the 2017 hybrid Fusion will remain at 26,550 dollars.
carsdirect.com

Infiniti pricing: Nissan’s luxurious sister priced its Q70 in the U.S., saying the hybrid will start at 55,900 dollars. Options for the hybrid are limited, as it is neither available as AWD nor as longwheel base.
carscoops.com