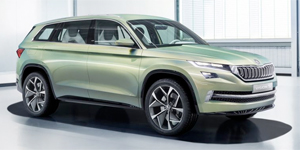 Vision for real: Skoda officially presents the Vision concept SUV at the Motor Show that reportedly foregoes the Kodiak set for launch in autumn. According to Automobil Produktion, a serial PHEV version will follow by 2019, as well as an electric model a little later.
carscoops.com, worldcarfans.com, automobil-produktion.de (in German)

VW luxury PHEV: Volkswagen and SAIC created the Phideon limousine exclusively for the Chinese market, where it will go into production this autumn. It is currently being shown in Geneva and comes with function previously not available in any VW. The German carmakers says a plug-in hybrid is planned as well.
autocar.co.uk, greencarcongress.com, insideevs.com

Borgward awakens: The revived brand that made its debut at the IAA last year, brings two new plug-ins to Geneva. Both the BX5 and BX6 TS are at pre-production stage and would be positioned below the bigger BX7. The SUV BX5 plug-in hybrid drive boasts 258 hp, while the sportier BX6 PHEV has 422 hp. Pure electric models will be a future option for Europe. Borgward further considers where to set up production in Germany and will announce a decision before the end of the year.
carscoops.com, paultan.org, prnewswire.com

McLaren charges ahead: The British race car marker plans 15 new models by 2022, half of them hybrid, Autocar reports. The rare P1 will be reissued and might race on purely electric power come 2023 – that is, if the ‘not-so-secret’ hyper car McLaren is currently working on proves a success as BEV.
autocar.co.uk

Road-ready electric UV range: British Bradshaw reveals a line-up of electric vehicles with body options that range from last mile delivery to pick-ups and shuttle buses. Maximum speed is 25mph with a payload of up to 900 kg. The 50-mile range can be extended by simply swapping the battery.
mhwmagazine.co.uk

Scenic hybrid confirmed: Renault is showing the fourth-gen Scenic in Geneva. The French confirmed that the MPV will indeed be offered as diesel-hybrid as expected.
autocar.co.uk, prnewswire.com

Electric kilometres in the Nissan Leaf.