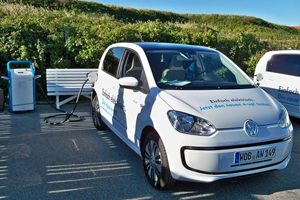 VW’s electric turnaround: Volkswagen’s focus will shift to electric cars and mobility services, CEO Matthias Mueller announced. 20 new electric models are to be introduced by 2020, while the German corporation seeks strategic partnerships – but not with the likes of Apple or Google. So-called Future Centres will open in Silicon Valley, China, and Europe. Following the emission rigging scandal in the U.S., VW set aside 18bn dollars; some of which will be invested in green initiatives.
eandt.theiet.org, autonews.com, abcnews.go.com

Daimler electrifies: Mercedes plans to transform its Hamburg plant into a high-tech site making drive components for electric transport. The revamp is to cost 500m euros and is designed to make 2,500 jobs in the country more future-safe.
daimler.com

Tesla owes Norway: The EV maker’s operation owes 2m NOK or 250,000 dollars in outstanding bills in Norway and therefore received a C credit rating – the worst the country has. Tesla claims it is not liquidity but a problem with the payment system that led to its debts.
electrek.co

Meanwhile, production of the Model X for Europe has begun. Still, reservation holders will have to wait at least two to three months for their electric SUV. Following reports about quality problems, Elon Musk announced on Twitter that several critical parts have been replaced and an additional quality control was introduced.
electrek.co (Europe), insideevs.com (quality control)

Conquest bonus: The Ford Fusion Energi costs 4,000 dollars less for people in California as the company raises the cashback by 1,500 bucks. Another 1,000 dollars are offered to those swapping their Toyota Prius or Chevy Volt for a Fusion Energi.
insideevs.com