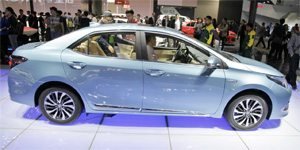 China Corolla update: Toyota announced that the hybrid Corolla will cost about 21,500 to 27,000 dollars in China. The car is being built there together with FAW, has a combined output of about 100 kW and a top speed of 180 kph. The China Corolla Hybrid will serve as model for the global facelift.
indianautosblog.com

i8 roadster revelations: BMW has published more information about the upcoming hybrid sports car. Code named I15, the convertible will boast an updated battery with up to 10 percent more power, as well as have a combined output of 420 hp. BMW announced the i8 roadster when it outlined its future strategy back in March.
hybridcars.com

Wrapped up: Carscoops may have caught a first glimpse of the upcoming Audi Q4, which will reportedly be available as a hybrid variant. It is hard to tell what they had in front of their lens, however, as the car is not only camouflaged, but also covered up.
carscoops.com

Titan in progress? Kurt Adelberger recently left Google for Apple. A regular enough occurrence in Silicon Valley. However, as Adelberger was working on a smart EV charger patent for the internet giant, it suggests that the iCar or Project Titan could be further along than previously suggested.
autoblog.com

BMW Down Under: Two plug-in hybrids are to enter the Australian market this month, as BMW will launch the X5 xDrive40e and 330e. The latter starts at 71,900 AUD, while the X5 SUV goes for 118,900 AUD. Pricing is thus almost identical to the petrol versions.
caradvice.com.au

of the unbinding kind were received by Lordstown for the e-pick-up truck endurance, said the company.