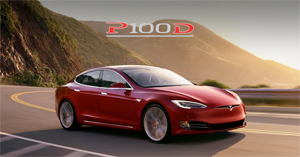 Model S P90D discontinued: Tesla has removed the P90D option for both the Model S and X, leaving only the P100D but with ludicrous speed included. At the same time, a new glass roof has been added to the configurator, which removes the crossbar over the car’s B-pillar. On Twitter, Elon Musk hinted that for the Model 3 a roof with solar cells will “probably” become available.
electrek.co, autoblog.com, electrek.co (solar roof)

Jaguar enters electrification: Jaguar says it will bring its first electric car to debut at the L.A. Auto Show, which starts at Nov, 18. That is about all the company has said so far.
autovolt-magazine.com

Chevy Bolt in production: GM has officially started production of the Chevy Bolt EV at the GM facility in Orion Township, Michigan. So far the hatchback is on a slow production line but it is the beginning.
detroit.cbslocal.com, electrek.co

Volvo to go with LG Electronics? The Swedish brand will supposedly work with Korean LG Chem to co-develop its autonomous and electric models in the future. The link has been established by industry insiders following a visit of Volvo CEO Hakan Samuelsson at LG’s campus in South Korea.
pulsenews.co.kr

No redemption: The 10 biggest oil companies have announced a 1bn dollar fund to reduce their climate change guilt. Different from what was expected, it will not include renewables but focus on reducing leaks of natural gas, capturing and store emissions when gas is burned to produce electricity, and increasing the fuel efficiency of vehicles. So, they pay each other to keep business running as usual.
theguardian.com

No more diesel-electric: The DS 5 Hybrid has been withdrawn from sale in Great Britain because it accounted for only 3 percent of the total DS 5 volume this year. This only applies on the isles.
autocar.co.uk

EV sales in Norway and UK.