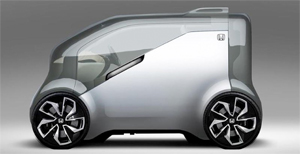 Honda teases with EV heart: The carmaker will fully unveil the self-driving electric car called NeuV at the CES in Las Vegas is January. The boxy commuter car of the future can generate its own emotions thanks to an integrated artificial-intelligence tool, which Honda says will create “new possibilities for human interaction and new value for customers.”
theverge.com, greencarcongress.com

Daimler made in China? According to Daimler board member Hubertus Troska, the German carmaker is considering producing batteries and electric cars in the Asian country in order to boost sales there. And the EQ is based on the Mercedes C-Class, which is already build in China. However, there are just “among the options in the room,” and nothing has been decided yet.
reuters.com

Ford to invest in new technology: According to a statement sent to U.S. regulators, the carmaker wants to raise 2.8m dollars in long-term debt. The money will be invested in new technologies such as autonomous and electric vehicles, as well as in mobility services like as ride-hailing and -sharing.
reuters.com

Bad air: Because of poor air quality, only vehicles with even number license plates were allowed on Paris’ roads on Tuesday, with the exception of hybrid and electric cars. Public transport could be used for free. Over the weekend, the Mayor of Paris committed to banning all diesel cars from the city centre by 2025.
thelocal.fr

EVS30 – Call for Papers deadline approaching: Scientific abstracts can be submitted for the renowned 30th International Electric Vehicle Symposium (EVS) until January 20, 2017. Don’t miss your chance to become part of the premier event on electromobility. EVS30 will take place on October 9-11, 2017 in Stuttgart, Germany. For more information, visit www.evs30.org

New Camry: Toyota is planning a new Camry model for 2018, boasting a more aggressive and stylish look than its predecessor. The final design will be presented at the Detroit Auto Show early next year. A hybrid variant is also in the pipelines.
carscoops.com

Tesla Model X review: Chris Evans from the Daily Mail got to get behind the wheel of the electric SUV – and was blown away. He said that when riding the Tesla, it “makes almost everything else on the road look like a museum piece by comparison.” He also found that “range stress” wasn’t actually an issue and loved that he could open all five doors with a touch of a button.
dailymail.co.uk