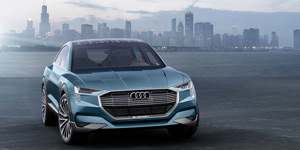 Audi plans new EV production sites: Starting in 2020, Audi wants to also build electric cars at its location in Neckarsulm, Germany, Audi CEO Rupert Stadler told German Stuttgarter Zeitung. Until then, the carmaker wants to already launch three electrified cars, the first of which will be produced in Brussels from 2018 (we reported).
stuttgarter-zeitung.de (in German)

Investing in electrification: The Chinese joint venture between Honda and Dongfeng Motor Group will investment 3bn yuan (436bn dollars) in a car factory in China. The yearly production capacity is said to reach 120,000 units from 2019. The plant will also have capacity for the production of electric and plug-in hybrid vehicles.
reuters.com

Hyundai to build e-buses: According to South Korean media, Hyundai is gearing up for serial production of electric buses. Development is said to be completed next year, while the buses will be sold in South Korea and other countries from 2018. One reason for the move is the growing demand for electric buses, especially in China.
etnews.com

Tesla allowed to expand: The city of Freemont has given the green light for Tesla to almost double the size of its electric vehicle factory there, as the carmaker is getting ready to meet demand for its upcoming Model 3. Tesla submitted a new “master plan” to city of Fremont back in October (we reported) that will see the addition of twelve new buildings and increase the number of jobs from now 6,210 to 9,315
electrek.co

Fossil fuel fan to lead EPA: U.S. President-elect Donald Trump has picked Scott Pruitt to lead the Environmental Protection Agency. Ironically, Pruitt is a climate change denier and a close ally of the fossil fuel industry, and has fought tooth and nail against President Obama’s Clean Power Plan. We are baffled.
nytimes.com, forbes.com

EU could sue over diesel scandal: The EU Commission launched a legal case against seven member states, including Germany and the UK, for failing to police emissions test cheating or impose penalties even after knowing the extend of VW scandal and that other carmakers were also concerned. The countries now have two months to respond to the allegations. If they fail to convince the Commission otherwise, the case could go before the Court of Justice of the European Union (CJEU).
autonews.com, europa.eu

Urban Infrastructure – Part 4. LONDON: How to keep moving the masses by all means?