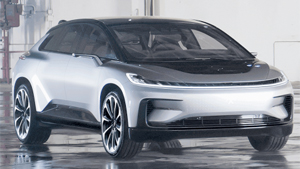 FF unveils new “species”: Faraday Future took the wraps off its first series model, the FF 91, calling it a “new species” of electric mobility. The SUV is to hit the road in 2018 and comes with a 130-kWh battery back and 378-mile range, while the 783-kW motor pushes it from 0 to 60 mph in just 2.4 seconds. The FF 91 can be pre-ordered on the company website for 5,000 dollars down. According to FF, more than 64,000 models had already been reserved in the 36 hours after the presentation.
electriccarsreport.com, youtube.com (video of CES presentation), electrek.co (orders)

Next-gen Leaf: Renault-Nissan CEO Carlos Ghosn said at the CES that the Japanese carmaker is working on a new generation of the Nissan Leaf that will be equipped with the latest automated driving features. While he did not give any details about i.e. range, Nissan’s senior vice president Takao Asami confirmed that Nissan has already developed a 60-kWh variant, which it is not offering because battery prices are still too high.
autocar.co.uk, insideevs.com (Ghosn), autoblog.com (Asami)

Electric future: Toyota unveiled a futuristic and fully electric concept car in Las Vegas, fitted with winged doors. There are no details about the Concept-I’s drivetrain, however, as not the motor but the EV’s personal voice-commanded assistant Yui takes the spotlight in this case.
greencarcongress.com, insideevs.com (with video) 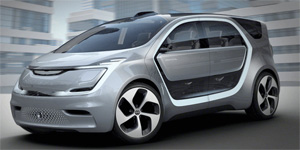 New electric Chrysler: The all-electric concept car that Fiat Chrysler presented at CES in Las Vegas is contrary to previous rumours not an electric variant of the Chrysler Pacifica, but an EV named Chrysler Portal Concept. It is a fully automated minivan that fits up to six people and features a 100-kWh battery pack that should last for up to 250 miles (400 km) of range.
greencarcongress.com, carscoops.com, autoblog.com

Investing in emobility: Ford announced that it will launch 13 at least partially electric series production models in the next five year. That includes a hybrid version of the F 150 pick-up truck and iconic Ford Mustang sports car (both scheduled for 2020). An all-electric SUV with 300-mile range will arrive in 2021. The carmaker is investing 700m dollars in its Flat Rock plant in Michigan, turning it into its centre for electric mobility and autonomous driving.
greencarcongress.com, electriccarsreport.com

E-Mobility Index: According to the newly published E-Mobility Index Q1 2017 by Roland Berger and the German Forschungsgesellschaft Kraftfahrtwesen Aachen (fka), Germany and France take the lead in terms of technological innovations – even for Japan and South Korea. China takes the crown in industry and the second spot in terms of market, just after France. Both countries are the only of the seven countries looked at, where the market share of electric mobility surpassed 1 percent in 2016.
rolandberger.com (press release), fka.de (complete Index)

Tesla missed its delivery estimates for 2016 just slightly. The carmaker delivered only 76,230 EVs instead of the planned 80,000 units this past year. Another 6,450 cars are still on route to their final destinations, but will be counted as part of January sales. Production numbers fell in the last quarter, apparently because of some kinks with the new autopilot hardware. Still, a total of 83,922 units rolled of Tesla’s production lines in 2016.
greencarcongress.com, electrek.co, insideevs.com