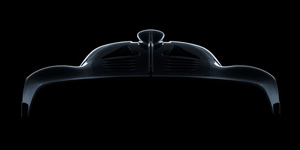 Hybrid anniversary gift: The Mercedes-AMG hyper car that will hit the road for the companies 50th anniversary, will be called Project One. It will be presented at this year’s IAA. Mercedes-AMG meanwhile released a new teaser and confirmed that the vehicle will be fitted with the hybrid drivetrain from the current Formula One racer.
autocar.co.uk, gtspirit.com, topgear.com

New Autopilot programme lead: Chris Lattner, an 11-year Apple veteran and creator of the Swift programming language, has taken a new job as Vice-President of Autopilot Software at Tesla. He takes over the steering wheel from Jinnah Hosein, SpaceX’s Vice President of Software, who will now fully focus his time on the space venture.
electrek.co, teslarati.com, tesla.com

New electrified car? Kia unveiled a four-door sports limousine called Stinger at the NAIAS in Detroit. Autocar reports that the new car could be made available as a hybrid variant – and possible even as a purely electric vehicle.
autocar.co.uk

BYD expands: The Chinese manufacturer wants to kick off construction of two new factories in Latin America before the end of the year. It will serve as production site for electric busses for the local market, as well as complement existing production facilities for the U.S., Hungary, and Brazil.
chinadaily.com

Chinese Munro Motor presented a retro-style electric moped. The Munro 2.0 weighs just above 35 kg and features a Bosch electric motor. Top speed is capped at 28 mph (45 kph and the exchangeable battery pack has enough capacity for 30 miles (50 km) of range. In China, pricing start at around 800 dollars, while the e-moped will be offered in the U.S. for 1,700 dollars from April.
techcrunch.com, electrek.co