Five new e-trons for China: Audi and its Chinese joint venture partner signed off their 10-year strategic plan. Next to forming its own brand for mobility and digital services, the two companies are also planning to produce five more e-tron models in China, on top of the already scheduled A6 L e-tron und Q7 e-tron, and introduce them to the market there. That includes purely electric vehicles.
greencarcongress.com, electrek.co, audi-mediacenter.com 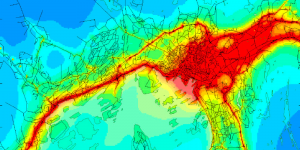 Diesel-ban in Oslo: The Norwegian capital banned private diesel cars from its roads on Tuesday and Wednesday between the hours of 6 a.m. and 10 p.m. The ban could be extended. German magazine Der Spiegel reports that Oslo even wants kick all vehicles with combustion engines out of the inner city ring by 2024.
thelocal.no, theguardian.com, spiegel.de (in German)

Kia Stinger update: According to Auto Express, Kia could launch an all-electric version of the Kia Stinger GT, which it presented at the Detroit Motor Show. The sleek five-door GT would then rival the upcoming Tesla Model 3, but is not said to hit the road before 2019. But it could then be fitted with level 3 or 4 autonomous features.
autoexpress.co.uk

SUV Aircross as PHEV: Citroën wants to introduce its SUV Aircross to the Chinese market at the end of the year. It will also be available as a seven-seater, as well as a plug-in hybrid from 2018.
carnewschina.com

Rollout plan: GM has published a rollout schedule for the Chevrolet Bolt in the U.S. The EV is currently only available at dealerships in California and Oregon, but can already be ordered in a total of seven states. By September, the Bolt will be available across the United States.
insideevs.com

Tesla referral programme: Tesla launched a new round of its referral programme until March 15th. Clients who successfully refer seven new buyers will receive two invitation to the Model 3 delivery event. Those who sell five vehicles get a limited-edition Powerwall and those with three successful referrals get a Model S for kids. Tesla also kicked off an annual awards programme. The first person to successfully refer 20 new buyers in each sales region – North America, Europe, or Asia Pacific – will get a Tesla Model S or X P100D.
electrek.co, teslarati.com