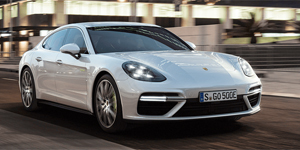 Stronger Porsche Panamera PHEV: The Panamera Turbo S E-Hybrid is the second hybrid variant of the Panamera range. Its 680 PS make it the strongest PHEV in the range, second only to the 918 Spyder. Battery capacity is 14,1 kWh, and this Porsche reaches a top speed of 310 kph.
carscoops.com, greencarcongress.com

Volvo performance PHEV? Over in Sweden, Volvo thinks about power hybrid versions of the S90 and V90 under the Polestar label. Launch would be no sooner than 2018 and the plug-in hybrids may utilise an optimised T8 system.
autocar.co.uk

The Model 3 takes shape: Tesla plans to offer online configuration of its economy EV in 3 – 4 months, according to Elon Musk. He hinted that the entry version will have a battery with less than 60 kWh but a heads-up display. Employees will get the first Model 3 as part of the ‘Founders Series’ – a chance to rule out early issues surely.
teslarati.com (configurators, founders series), electrek.co (display, battery sizes)

BAC to electrify: British Briggs Automotive Company (BAC) plans a 1m pound hybrid racer that aims at a market usually shared between the likes of LaFerrari or the McLaren P1. The brothers Briggs also said they will electrify their Mono one-seater, which may turn into a full EV.
roadandtrack.com, wiltonclassicsupercar.co.uk

New Chinese EV maker: China got a new EV brand called Yudo and it already got approval from the rulers in Beijing. Its first model will be an electric SUV with a range of 350 km but Yudo says it is also working on a more compact EV as well as a crossover.
carnewschina.com

Pedelec assist in France: French citizens may claim 200 euros from the government when they buy an electric bike. The new incentive is valid until January, 31 2018 and excludes only lead acid batteries and bikes with more than 3 kW power – both cases are unlikely.
treehugger.com, legifrance.gouv.fr (decree in French)