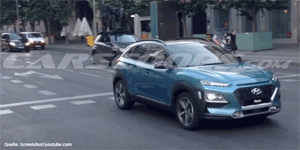 Hyundai’s next electric SUV: The Kona may be next in line for electrification at Hyundai and at a fairly affordable 35,000 euros, Auto Bild reports. A 50kWh battery pack shall allow for up to 500km range (NEFZ) by fall 2018. Also, a video shows Hyundai’s Kona unveiled for the first time.
electrek.co, youtube.com (video)

Maserati to borrow from Chrysler: The Italians want electrification or better parts of it and decided to use Chrysler’s PHEV drive tech from the Pacifica for their upcoming Levante plug-in hybrid. Maserati reasoned that developing a dedicated drive would be too costly as they calculate the PHEV version will account for less than 10 percent of Levante sales. As reported, the Italians also plan hybrid versions of their Ghibli, Quattroporte, GranTurismo and GranCabrio as well as a fully electrified Alfieri.
carscoops.coml, caradvice.com.au

EU for stricter control of OEMs: A majority of EU countries unite behind a draft for new exhaust emission tests and type approval rules as ministers approved the proposal. It asks the European Commission to carry out spot checks and fine manufacturers if they are found to be cheating. The rule rolls in the wake of Volkswagen’s diesel fraud and must only be waved through by the EU parliamentarians. Effectively, it will move power from national authorities like the German KBA to Brussels but reserves the right to review such decisions.
europe.autonews.com

Science for racing: As part of its Sparrowhawk project, Coventry University is building a new platform, supposed to significantly simplify the outlay and to reduce costs of niche car production, including electric and autonomous vehicles. Based on its creation, the uni considers to launch its own sports car including an all-electric drive that could be produced as early as 2019.
coventrytelegraph.net

Smooth swap: Nissan is to take the starting place of its successful ally, Renault e.dams in the Formula E from next season. The French wish to fully focus on the Formula 1.
motorsport-total.com

No future for Lexus CT200h in the States: Due to a drop-off in sales, Lexus will discontinue the CT200h hybrid in the U.S. by 2018. In contrast, the compact car shall stay in the stores in other markets.
blog.caranddriver.com, carscoops.com, hybridcars.com