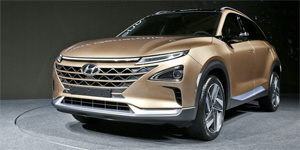 Hyundai’s new FCV: The Koreans have presented their latest fuel cell SUV in Seoul, which will hit the shelves by 2018. The FCV comes with 120kW while range is given at 580 kilometres. In total, Hyundai and Kia have lined up 31 electrified models until 2020 – eight all-electric ones, eleven PHEV, two FCV as well as ten simple hybrids.
koreaherald.com, koreatimes.co.kr, paultan.org

Audi is running the e-Tron for real as these first spy shots from testing reveal. Launch is set for 2018 and the electric SUV will be the German carmakers first attempt to compete with the likes of the Tesla Model X or Jaguar I-Pace. The e-Tron range is said to be 500 kilometres.
autocar.co.uk

200m dollars for Future Mobility: A start-up led by former BMWi Manager Carsten Breitfeld and already backed by Foxconn and Tencent has generated another 200m dollars in a new round of funding. Future Mobility Corp (FMC) wants to use the money for R&D mainly and has scheduled its first model, an SUV, for next year’s CES. Once it launches by 2019, it is to cost 300,000 Yuan (45.000 dollars) and FMC plans two more models until 2022.
reuters.com

Mercedes’ diesel scrappage scheme is now available to buyers in the UK. Those willing to swap their old diesel guzzler for a hybrid or even the new electric Smart will receive a 1,000 (Smart) or 2,000 pounds throughout 2017.
autocar.co.uk

Mazda cleans its act: Mazda is working on new petrol engines labelled Skyactiv-X, which are supposedly more fuel efficient. Comes 2021, the motor may also work in combination with an electric drive, Autocar learnt. An all-electric Mazda model may hit the road even sooner though, 2019 that is, and it may include a range extender too.
autocar.co.uk

The New Smart ED is off to a rough start in the States as the EPA gave it a range of a combined 58 miles only. That is 10 miles less than the previous Smart Fortwo Electric Drive despite the battery having stayed the same. So it must be an issue related to weight and/or aerodynamics.
insideevs.com