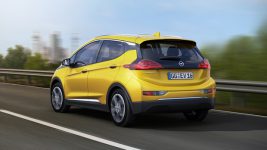 PSA Group, which paid General Motors 1.3 billion euros for Opel, now wants about half of the money back after discovering Opel’s emission strategy hinged on sales of the Ampera-e mainly, which was finally not included in the sale.

The French group says it only now learnt the full extent of its CO2 emissions challenges and exposure to European fines, Reuters reports. Opel’s plan to stay within the upcoming EU limits relied basically on high sales figures of the Ampera-e model aka Chevy Bolt, while ignoring that this goes along with 10,000 euros loss per sold vehicle, according to PSA.

The French are seeking 600-800 million euros compensation from GM and while discussions have started, no formal claim has been initiated yet. GM spokesman David Caldwell told Reuters that “We provided them (PSA) with substantial information.”

While PSA declined to reply, it says it now needs to move Opel models onto its own more fuel-efficient technology faster than planned. If it cannot cut carbon dioxide emissions before new EU limits are phased in from 2020-21, hefty penalties will follow.

During the time of the acquisition in August 2017, the official line read that PSA would continue to work on electrification together with GM (we reported). While that plan quickly faltered, Opel/Vauxhall wants to electrify all of its carlines in any case, if it is enough without the Ampera-e remains to be seen.

Musk at its best: “Rocket with Tesla Roadster on board”

BMW not permitted to use the term “zero emissions”