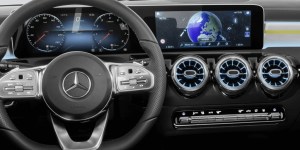 The next Mercedes A-class is ever more likely to bear the EQ Power label designating electric propulsion. Rumours were fuelled anew through pictures from the inside of the latest model.

The grapevine of the world wide web had whispered of it before but it looks as if a plug-in hybrid version of the upcoming Mercedes A-class is as good as set. At a very close look, photos of the interior reveal a small gauge with a battery symbol and a display stating the range and remaining power in the battery. It indicates a total range of 50 kilometres which strongly suggests that the press pictures show a hybrid capable of driving all-electrically.

Expect to see the new A-series launch at the Geneva Motor Show in March 2018. The projected PHEV will then be part of an overall lineup of eight electrified vehicles Daimler plans for its EQ Power label.
carscoops.com