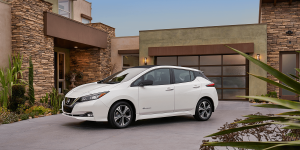 Two months after launching the 2018 Leaf in Europe, Nissan has received the benchmark of 10,000 pre-orders from European customers. Interesting comparison: Back in October, the number of pre-orders accumulated to 9,000 worldwide.

Approximately 1,600 pre-orders have been handed in from German, Austrian and Swiss customers. But the majority of interested people shall come from Norway.

Production for the European market is situated in Nissan’s factory in Sunderland, Great Britain. The pioneers of the new Leaf generation are supposed to roll off the lines these days. First deliveries are scheduled for March 2018.

As reported, the 2018 version of the Leaf has been presented September this year. Its battery holds 40 kWh and the much expected larger version with 60 kWh has been announced as well. Semi-autonomous features such as ProPilot Park have been included, too. In October, Nissan celebrated the car’s Europe debut in Oslo with a launch edition called 2.ZERO Edition.
newsroom.nissan-europe.com