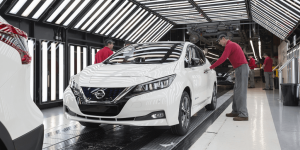 Nissan starts the production lines in British Sunderland where it is making the next-gen Leaf as of now. Deliveries in Europe are to begin by February 2018.

The Nissan facility in Sunderland is the last site to join the global Leaf production push as before facilities in Japan and the States had reportedly begun to churn out the 2018 Leaf model. The factory in Great Britain will make all units for the European market and Nissan had invested an additional 41m euros despite the on-going Brexit turmoil.

All lines run at full capacity (we reported) as Nissan hopes to keep the Leaf in the bestselling EV ranks and had sold 260,000 worldwide in June this year. Nissan also got little choice as it is the only all-electric model it offers globally so far apart from the e-NV200 van.

However, together Renault, Nissan and Mitsubishi have come up with a six year plan called Alliance 2022. It includes 12 all-electric models that shall utilise shared platforms and components and thus cover multiple segments.

As reported, the 2018 version of the Leaf has been presented September this year. Its battery holds 40 kWh and the much expected larger version with 60 kWh has been announced as well. Semi-autonomous features such as ProPilot Park have been included, too. In October, Nissan celebrated the car’s Europe debut in Oslo with a launch edition called 2.ZERO Edition.