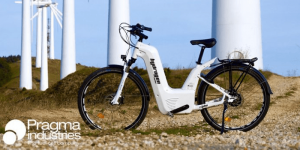 French manufacturer Pragma Industries wants to expand production of its H2 bicycles for fleet operators and municipalities from lately 100 units to 150 units in the present year. The current price of 7,500 euros is to drop to 5,000 euros.

As reported, ten hydrogen-powered pedelecs with a Brose e-bike drive are now in use at a hospital in French Saint-Lô. The model is not the first hydrogen bicycle on the market, however, Pragma Industries is more ambitious than other manufacturers to bring such fuel cell electric bicycles to a wider range of users. According to founder and chief executive Pierre Forte, there is considerable interest with request coming from Norway, the United States, Spain, Italy and Germany among others. Further deals have been already closed: 10 H2 bikes will for example go to Cherbourg, where they will be used from Spring 2018 and 40 more hydrogen pedelecs in total will be delivered to Chambéry, Ariège, and the communauté d’agglomération Pays basque.

The bike weighs 25 kilos and can be recharged in less than two minutes for a range of about 100 kilometres. The electric drive system comes from Brose and power is stored inside a 2-litre hydrogen tank. On its website, Pragma speaks of a 150 Watt fuel cell and an additional 150 Wh Li-ion battery as “bridging energy.”

Furthermore, Pragma is currently working on a bike capable of producing hydrogen ‘aboard’.
reuters.com

LimeBike to launch pedelecs in U.S. – and soon in Europe