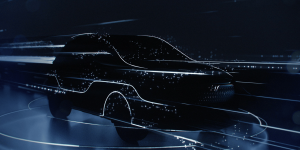 Hyundai has released the first teaser for its all-electric model Kona ahead of the debut in Geneva this March. The Koreans confirmed two battery option with the bigger one said to last for almost 500 kilometres.

The Kona Electric will stand in bright light at this year’s auto salon in Geneva with an online debut scheduled even sooned, on February, 27. Ahead of the show Hyundai has issued a first teaser image accompanied by some more detail.

There will be two electric drive options of which Hyundai only said that they will be strong. More details were given with regards to the actual power packs of the compact electric SUV. There will be two batteries as well. Rumours had spoken of a long range battery before and have now been confirmed. The larger one is to hold 470km under the latest WLTP regulations.

Once the Kona has rolled into dealerships later this year, it will mark the start of a wide ranging electrification offensive that regards the whole family. Hyundai-Kia says it wants to run 14 electric models by 2025 as it adds to the portfolio of two existing ones, Hyundai’s Ioniq EV and Kia’s Soul EV (we reported).