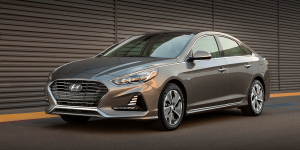 Korea’s Hyundai has put the updated hybrid and plug-in hybrid versions of its Sonata on display at the Chicago Auto Show. The 2018 Sonata is made in Asan, South Korea and both hybrids are set to launch this year in the States.

The 2018 Hyundai Sonata Hybrid and Plug-in Hybrid made their debut at the Chicago Auto Show with on sale dates in the U.S. announced as follows: the hybrid model will arrive in the first quarter of 2018, while the Plug-in will come later in the second quarter.

Both models received a full facelift with updates to the interior and exterior. There are also new wheel designs and new LED headlights. Powering the 2018 Hyundai Sonata Hybrid is a 2.0-liter four-cylinder engine, coupled with a 38-kW electric motor. The Sonata Hybrid can ride on electric power alone at speeds up to 120 kph.

The Sonata Plug-in Hybrid has an extended all-electric range of up to 43 km delivered by the 9.8-kWh Li-ion battery onboard. It can recharge in under three hours with a level-two charger.

The Sonata Hybrid and Sonata PHEV will be made in Korea at Hyundai’s Asan facility.