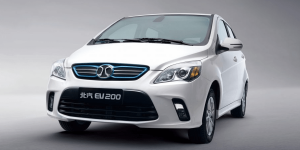 China’s new energy vehicle sales soared by 480 percent year on year to 31,638 units, according to the China Passenger Car Association.

Battery electric vehicles took up 61 percent of the total sales of plug-in vehicles. In numbers, electric car registrations stood at 19,392 units while the plug-in hybrid electric vehicle sales came in with 12,246 units. BAIC BJEV ranked first last month with BYD following suit. The latter came in at the top in plug-in hybrid sales though.