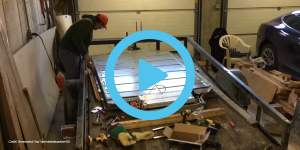 A regular Tesla Powerwall battery would usually plug in to the regular grid. Congressman Massie’s house is however not plugged into the States’ electricity network and so he has recovered a Tesla battery from a crash car.

As an MIT engineer, he managed in a DIY move to adapt it as a simple energy storage. The politician in him, recorded a 23-minute video to document what he calls a “pretty dag-gone exciting” do-it-yourself adventure, in which he travels to Georgia to buy a wrecked Tesla Model S for 15,000 dollars. He now uses its lithium battery to replace the lead-acid batteries he had used before.

Tesla usually does not offer its EV batteries for second life applications.